After one last swim and a walk around the campground we loaded Zaph into the truck and headed back to Milton. We’ll be staying here to around December 1, when we will head south for the winter. Two and a half months should be enough time to figure out a rough itinerary!

Yet Another Fantastic View

Today’s hike was the 5.1 km Booth’s Rock Trail. We had followed a portage path to look at one of the small lakes when we heard a bellow followed by the sound of many hooves and crashing through the trees. We saw one moose dart past on one side and heard more noise on the other side. Back on the path we saw fresh moose prints and were glad that we weren’t on the path when the moose decided to charge by. Booth’s Rock Trail is one of Zaph’s favourite trails as he gets to swim by the dock at the old Barclay estate cottage site. 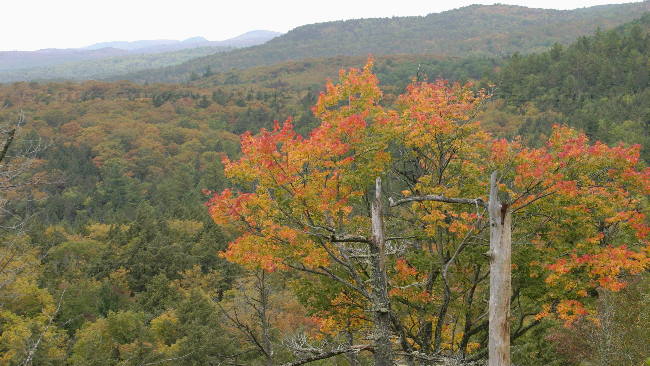 The trees are starting to turn. 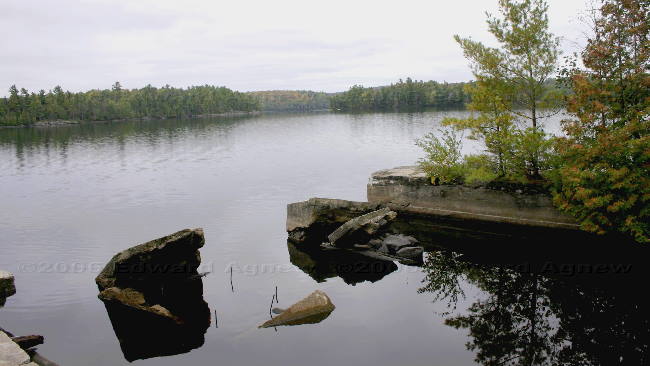 The dock at the old Barclay Estate. 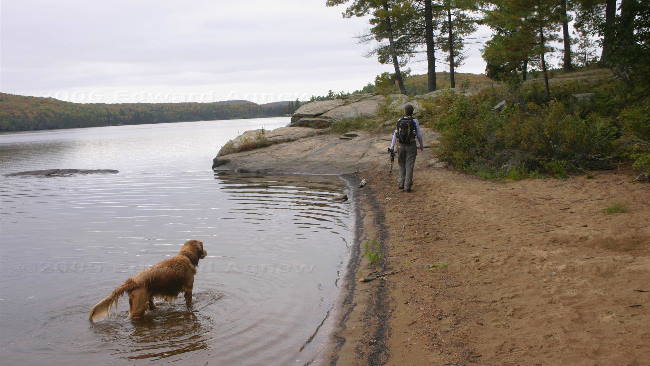 Zaph waiting for a stick to be thrown.

Today’s hike took us along the Madawaska River and then up a cliff for a great view of Cache Lake. One of the highlights of the approximately 15 km hike was finding a moose grazing on the opposite side of the river. 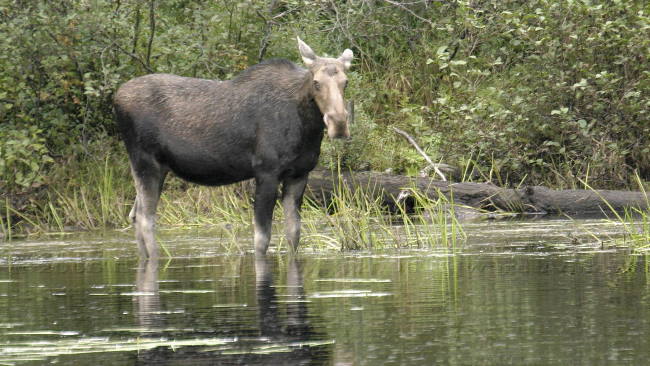 The moose was grazing in the river. 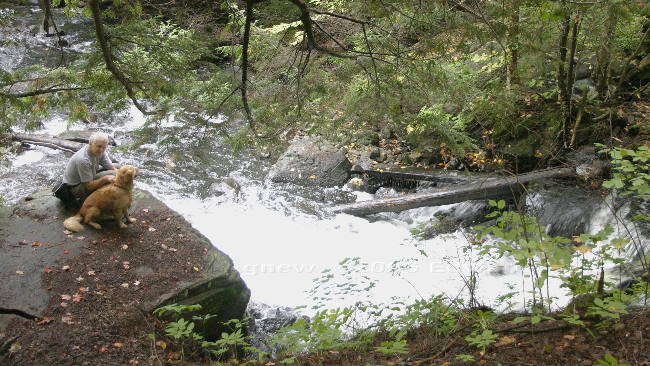 Ed and Zaph checking out a small waterfalls. 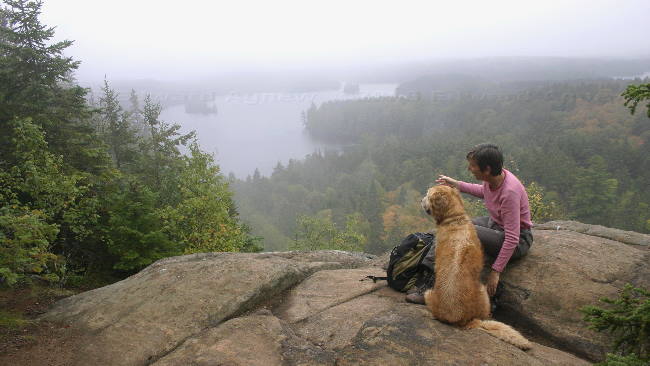 Zaph and I checking out the view of Cache Lake.

We woke up to the sound of rain on the trailer roof this morning so we snuggled back under the covers for awhile. Later when the rain was only a drizzle we headed for a 2 hour walk following the bike path along Two Rivers Lake.

Lots and Lots of Cliffs

We hiked Centennial Ridges, a 10 km trail today. This trail takes you along two different ridges offering some spectacular views. 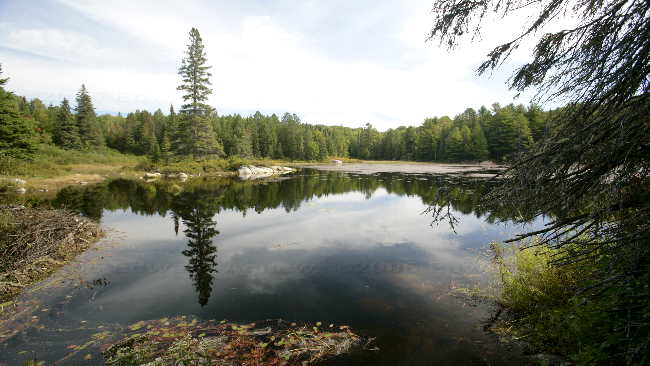 One of the lakes along the trail. 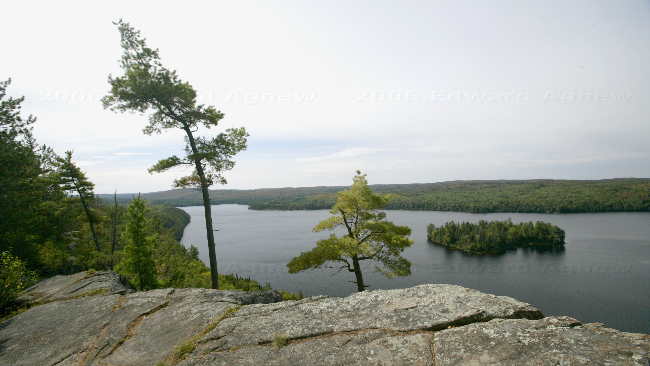 A view of Whitefish Lake from one of the ridges. 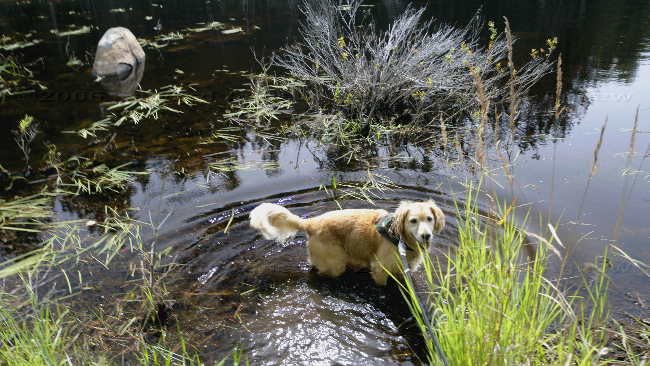 Zaph enjoying a dip at a small lake along the trail 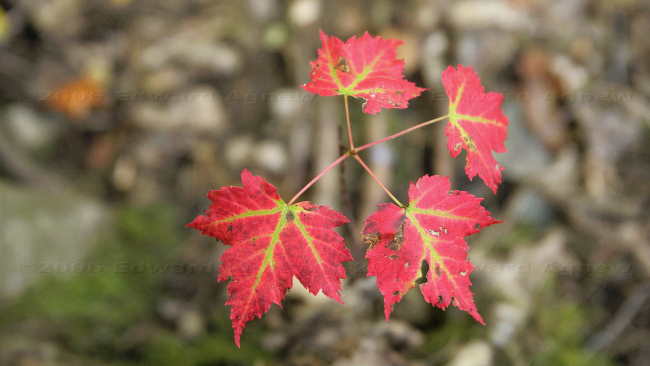 Algonquin Park is my favourite park in Ontario, so we decided to go there for a few days. Zaph of course likes the park as well since there are lots of lakes for swimming and trails for hiking. 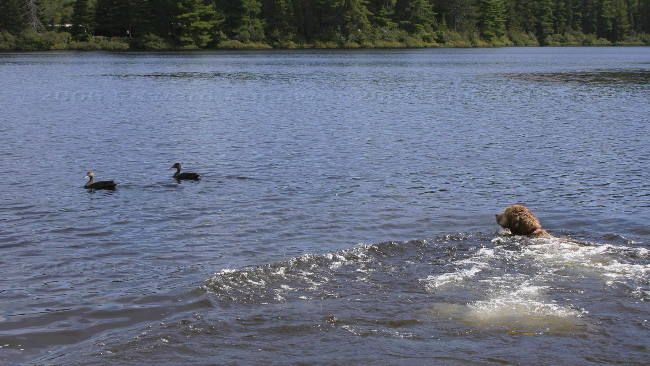 Zaph couldn't wait to go swimming when we got to Algonquin.

Ed spent the majority of the day sifting through the 500 odd photos he took at the wedding plus the 30 or so minutes of video I shot. His goal was to transfer the photos and video to DVD’s and give a copy to the bride and groom before we left town (they were leaving for their honeymoon the following Saturday).

The wedding was beautiful and the reception was a fabulous party. However, as expected the weather didn’t co-operate 100%, but at least it didn’t rain and the sun finally started to shine for the pictures in the park. As Ed was the photographer, the lack of rain was welcome. 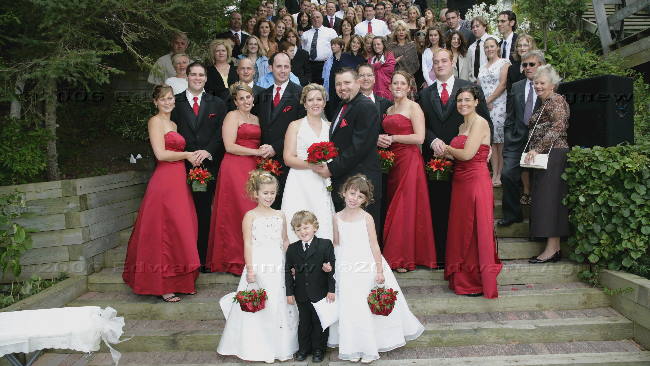 The wedding party and their guests. 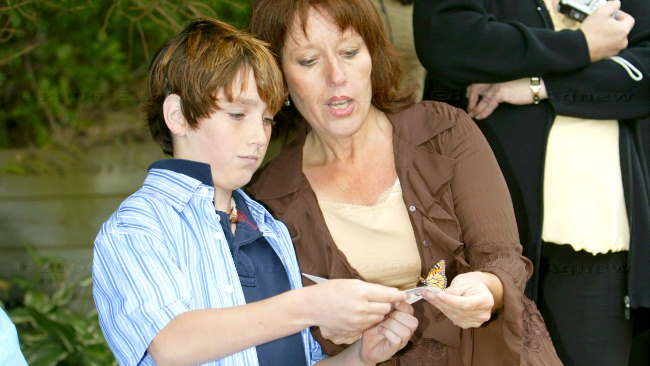 Butterflies were released for departed loved ones during the ceremony.

The Wedding is Getting Close

Colin and Margaret’s son Cort is getting married to the lovely Sherri-Lyn on September 9 and Ed is going to be the photographer. We headed to Barrie (where the wedding is going to take place) so Ed could discuss photos with Cort and Sherri-Lyn and check out the locations where he’ll be taking the photographs. We also did a drive down to Burlington to pick up camera stuff that Ed needed for the wedding, find some of our dress up clothes (don’t need to dress up when you live in a trailer) and drop Zaph off at his grandmas for a couple of days. 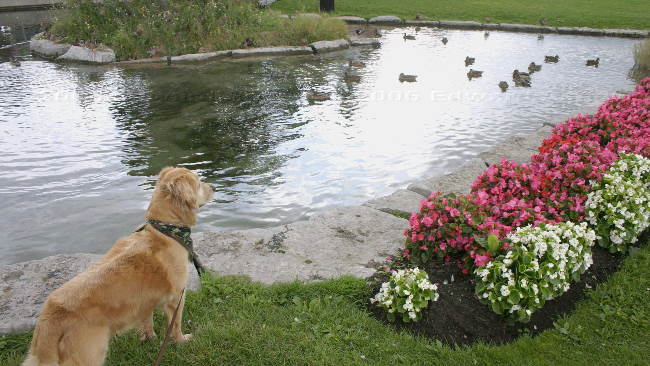 Zaph was hoping the ducks wouldn't notice him in camouflage bandana.

Back to the Airport

Anne and Victor invited us to spend the Labour Day weekend at their hanger at Hanover Airport. We had such a good time on the August long weekend that we decided to take them up on their offer. The excitement for the weekend was Victor putting the many layers of paint on the wings and painting the registration on the fuselage. After dinner on Sunday we inspected the plane to determine that once again Victor had done an excellent job. The wings were a bright red that match the red on the tail and nose of the plane. On Monday we drove out to Anne and Victor’s farm where they hope to start building their house next spring. Zaph loves the farm as it comes with a creek, a hill and lots of fields to run around in. 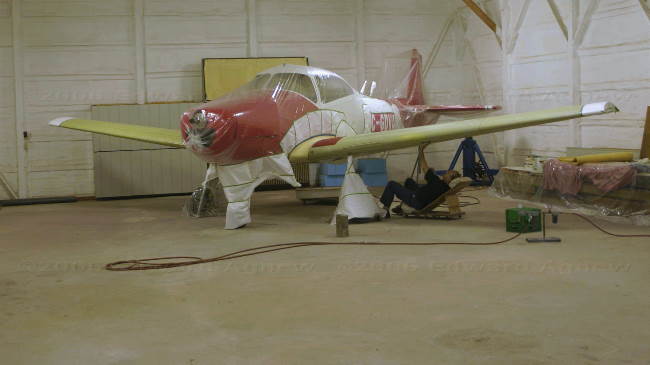 The airplane at the start of the weekend 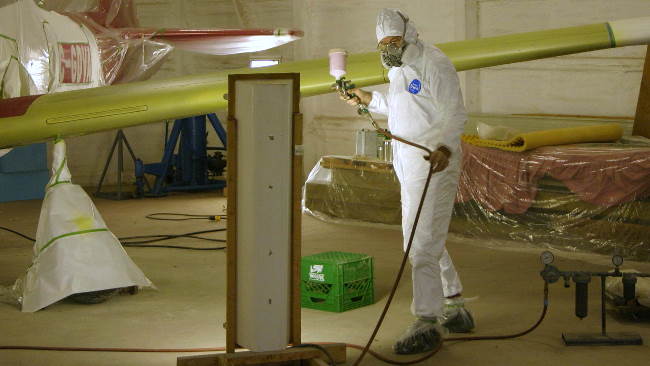 Is this a scene from X files? No, it's just Victor getting ready to paint. 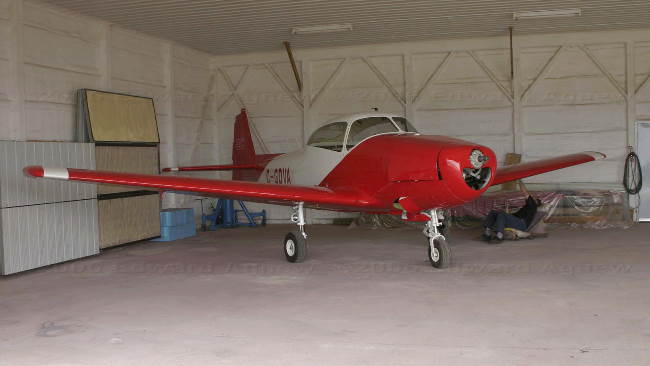 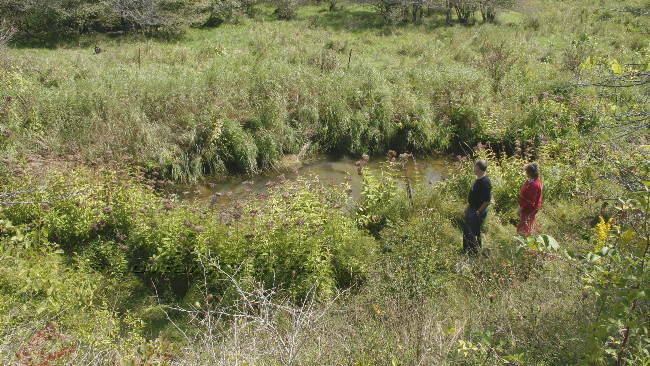 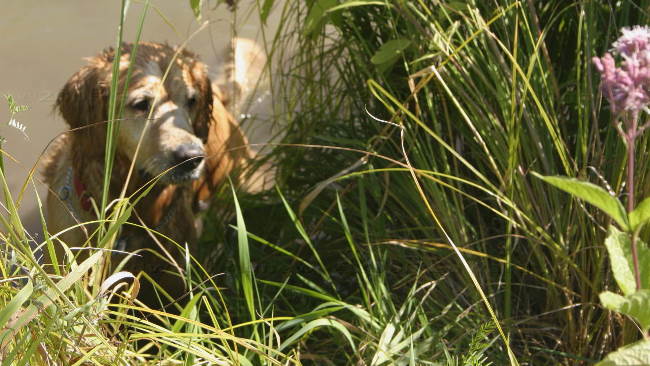 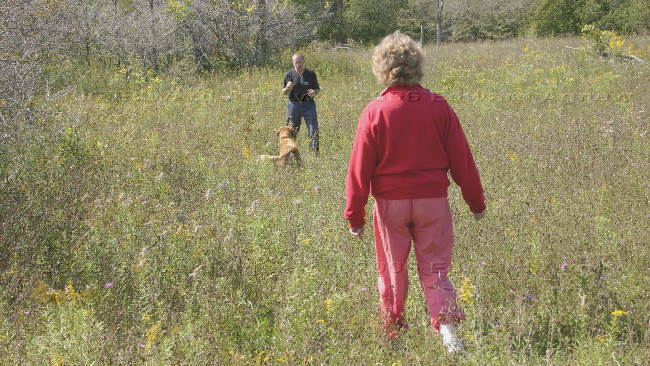 Zaph thinks "Swimming and two people to play ball with me .... I like this place!"