The alarm went off at 6am so Ed could get up and be ready to head to the GM dealer for a 7 am appointment. My nephew, Tim showed up at 6:30 and off they went. There was some good news and some not so good news when Ed returned at 9:30am. The good news was we could head today out as planned, the not so good news was we needed to replace the transfer case, but for now it was patched and would hopefully hold till we reached Mission and organized getting a new transfer case installed. I really didn't enjoy looking at the quote but we need the truck in good working order if we're going to do the long drives we do.

Today's drive was only 3 hours as we planned to stop in Willis, about 40 minutes north of Houston, to visit friends from Missouri that were staying in the area. We went to a Mexican restaurant for dinner and had a very nice visit.

The RV park where we were staying put on an amazing fireworks show. The sky was lit with the display for almost a half hour. We had lucked into a spot that allowed us to see the show from the bedroom window of the trailer. The show as over by 8pm --- I was in bed by 9 and Ed followed before 10. I blamed it on all the driving, Ed blamed it on having to get up at 6am.

Visit with the Dentons

Today we spent the day with Carol, Darryl and their family. It was great to see Sarah and Omar and see how much they have grown since last year.

Darryl took me on my annual motorbike ride this time on the bike he bought in the summer. Lots more power than the previous bike. Ed had done a routine look under the truck and noticed oil leaking, so he crawled under the truck for a better look, and determined that the transfer case had a problem and was leaking. We're going to have to get that checked before we leave Tyler so make a few phone calls to get an appointment for early the next day. 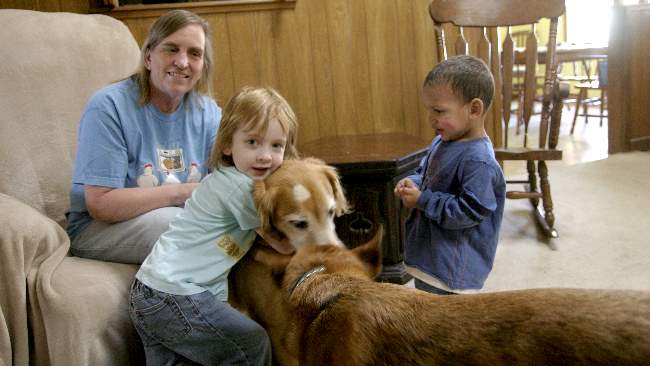 Another full day of driving. At least the sun was shining and the temperature was perfect for driving --- not too hot, not too cold. By 5pm we were parked in an RV park just south of Tyler waiting for Carol and Darryl to arrive so we could head out for a dinner and visit.

Today was going to be a long day as we were going to drive as far south as possible then stop at an RV park and de-winterize the trailer.

After an hour or so driving on I-75 we took another highway that got us over to I-65 on which we continued to drive south. The weather was pretty good except for the heavy rain as we drove through Nashville --- at one point is was raining fairly hard and the sun was shining, boy did that make it hard to see.

We stopped at a RV park just outside of Tuscaloosa, Alabama. 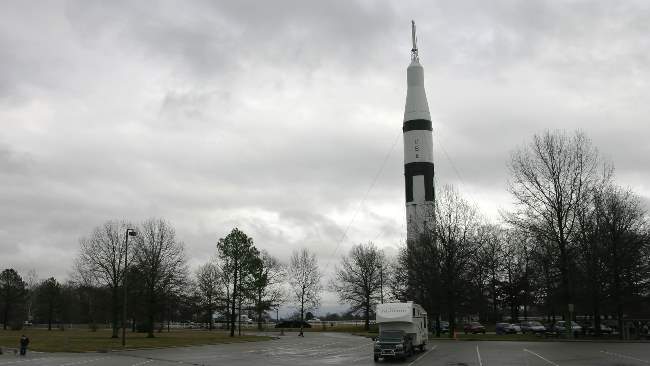 The welcome centre as you enter Alabama from Tennessee has a Saturn 1B rocket on display. That's our rig in the foreground.

First thing I did this morning was look out the window..... had it snowed? ..... were we able to leave? I woke Ed and told him to get a moving as the driveway was clear .... we were going to be able to leave. We scurried about doing the last minute stuff like packing things we had needed for this morning, shutting off the water, turning off the hot water heaters and checking to make sure everything was OK. By time we headed out to the trailer snow was falling --- too late we were determined to leave. Looked like we were going to take the longer route to stay on main roads. The snow continued as we drove the hour south to the 401 but the weather forecast indicated that it would stop and sure enough it did by the time we reached London. In fact the sun shone. A sign on the 401 indicated that both Windsor and Sarnia border crossings had half hour to hour wait times, so we decided to head to Sarnia. Except for the hour wait we had the easiest crossing ever with the trailer --- citizenship?, where are you going?, how long are you going? and a quick look at the passports.

Due to the delay of the longer route and the border crossing we opted to drive down I75 to get as far south as possible. We made it to a Walmart in Troy Ohio where we spent the night.

My mother and brother headed for home right after an early breakfast and Ed and I started the job of loading the trailer hoping to depart on the 27th. The driveway was a sheet of ice as Ed had rinsed the car off before putting it in the garage on the 24th ---- it's really hard to believe but we actually have a car in a garage. I had visions of Ed and the tv flying through the air as he walked across the driveway. Luckily, a bit of salt and some sun fixed the ice problem eliminating my nightmarish visions. By eight pm we had loaded the trailer, emptied the hot tub, winterized it, cleaned the house and done four loads of laundry --- hope we remembered to pack everything!

Christmas with lots of snow

Our first Christmas in Walkerton was a very white one --- I wonder if it's this white every Christmas? My mom and brother arrived on the 22nd to celebrate the Christmas season with us. We had a lot of fun during their visit including a drive to see the Festival of Lights in Owen Sound, shovelling the driveway, bathing Zaph (mom had the fun job of blow drying Zaph), relaxing in the hot tub and of course eating. Our friends, Anne and Victor (their building the house) joined us for Christmas dinner. 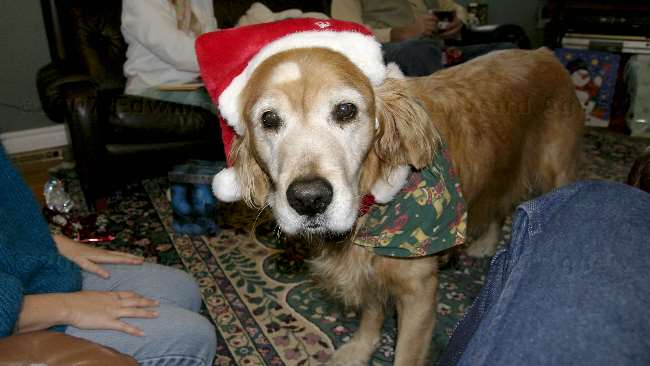 Santa Claus best watch out, "Santa Phod" is on his way. 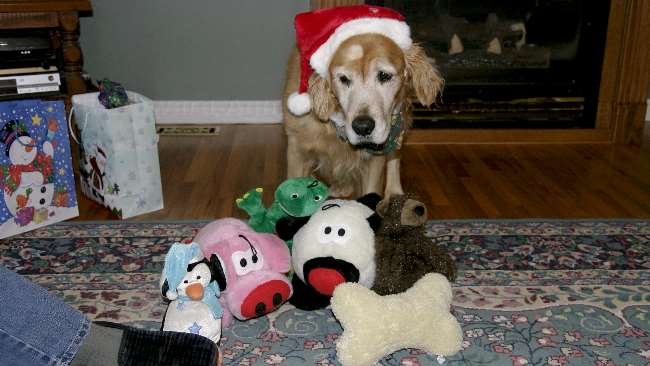 Zaph had a pretty good haul this Christmas. 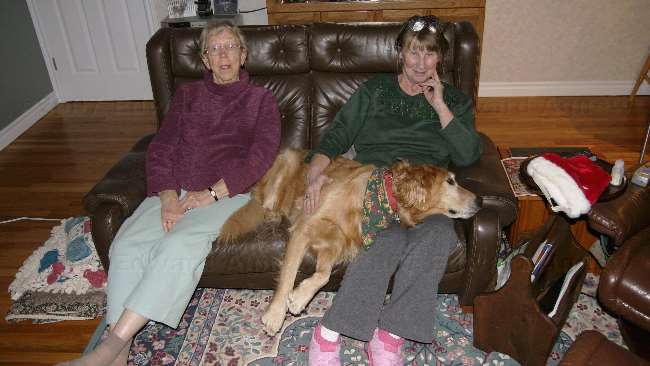 Late summer, fall and winter were busy times. First, we were "slave labor" for friends building a house just outside of Paisley (north of Hanover). Actually, we volunteered our services and had a great time helping out. Our friends had a contractor put up the structure, finish the outside and drywall. They took on the tasks of wiring, finishing the plumbing and pretty much finishing the interior of the house. When we left just after Christmas they had moved into a couple of rooms in the basement "camping style".

Second, we went house hunting. I spent a lot of time browsing MLS looking for the "perfect house" and found it in Walkerton. The drinking water is most likely the best in Ontario. Walkerton is approximately 10 km west of Hanover, about an hour due north of Waterloo.

Third, we moved. After two long days of moving I was having trouble believing that we had actually gotten rid of a lot of things and I know we did. I get the shakes imaging what it would have been like to move everything we had in the Mountsberg house. 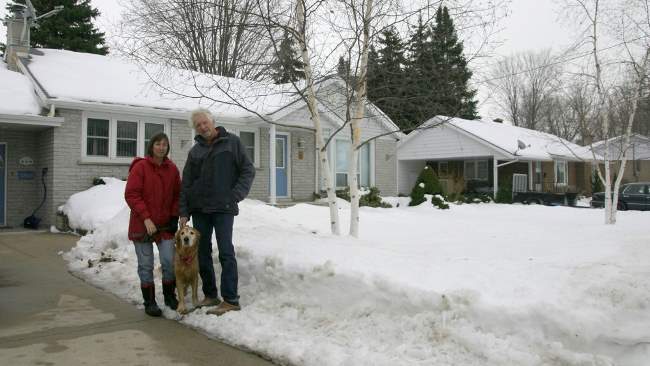 Ed, Zaph and I standing in front of our house. 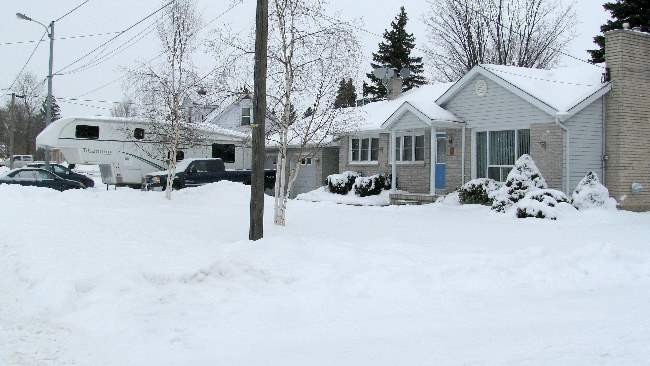 We have a big driveway --- the trailer, car and truck all fit with room for a visitor as well. 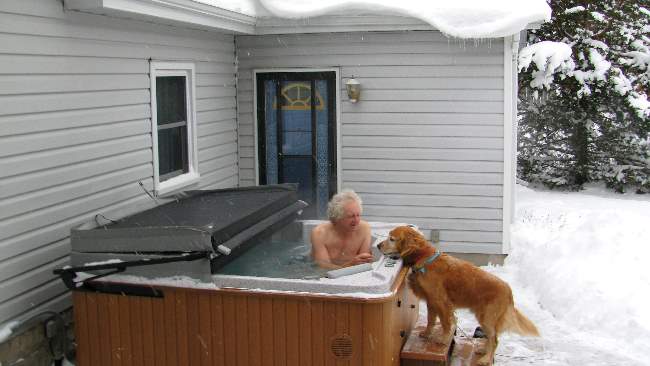 The first purchase for the house was a spa --- we had really missed the hot tub. Getting to sit in it is a nice reward after shovelling snow.