It's been a busy few weeks. In late August Ed and I received an invitation to a 30th anniversary dinner and as I was the maid of honour at the wedding I figured we should go. The dinner was going to be in a town a 2 hour drive from home which is easily doable but in my make the most of a drive mind set I e-mailed a friend who lives in the area where the dinner was being held and invited ourselves for the weekend .... including asking them to puppy sit Zaph while we went to the dinner. Being the wonderful friends that they are, Bob and Gwen said yes please come and we'd love to look after Zaph. The anniversary party was great though I only recognized the "bride & groom" Dorothy & Tom and the "brides" parents. I was really surprised how much one person had changed .... didn't know him well but had the memory the three of us (Jeff, Dorothy and I) driving in his MG midget with me in the back (somehow I fit) to a local race track, betting $2 to show on the races and winning enough between the three of us to buy a pizza. 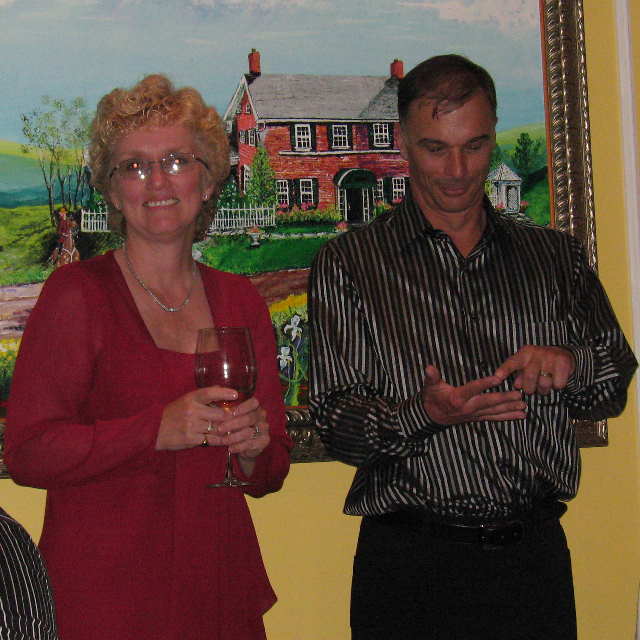 I don't think Zaph missed us at all that evening as Bob and Gwen took him for a walk and just plain spoiled him. Even their two cats didn't seem to mind that Zaph was visiting .... we think they thought he was a walking carpet. On Sunday we had a good visit then headed into Toronto to meet Sue and her boyfriend Greg for dinner --- Sue is Bob and Gwen's daughter and our " "neice". This was the first time we met Greg and happily he passed inspection. 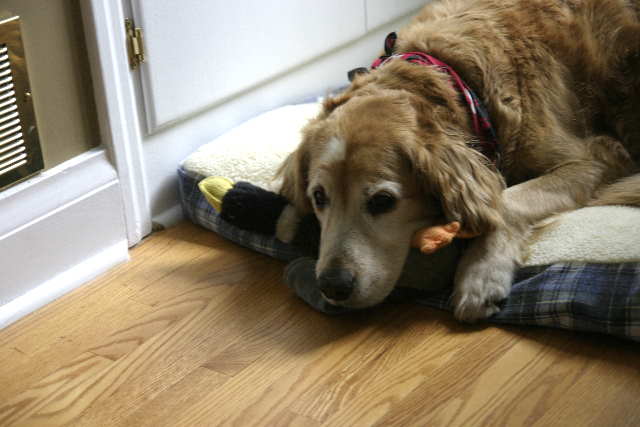 Relaxing at home after the busy weekend with Bob the duck. When we were at Bob & Gwen's house we told Zaph to get Bob .... instead of going to the human Bob he picked up his duck thus naming the duck Bob.

Zaph and his friend Maggie convinced Sue (Maggie's mom) and I that the weather was still good enough for one last trip to the beach. The water felt quite cold to me but it didn't stop Zaph and Maggie. 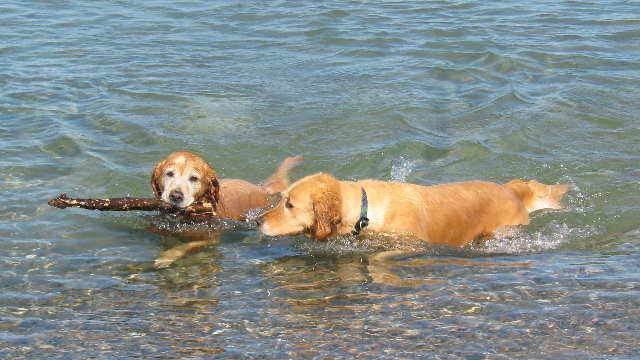 Happy Birthday mom!!!! We met my mom, brother, cousin Yvonne and her husband Bob in St. Jacobs at a restaurant my mom likes for lunch. After a really enjoyable lunch we wandered down the main street checking out the shops. Ed was the only person who bought anything --- a container of dry wall mud --- pretty exciting eh. He had put up a couple of sheets of dry wall the day before but hadn't gotten the mud yet. Thought he buy it when he saw it so he could put the first coat of mud on when we got home.

We had ordered a new front window a couple of weeks ago and I received a call on my cell phone from the window place while I was in Burlington visiting my mom. If we were home they could install the this afternoon ---- luckily Ed was home and the window was installed before I got back. The best part was there was no mess for me to clean up. 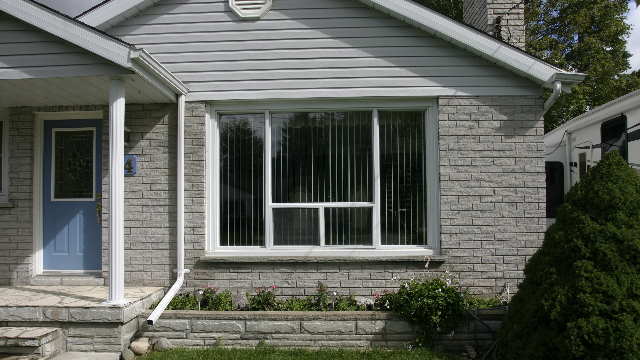 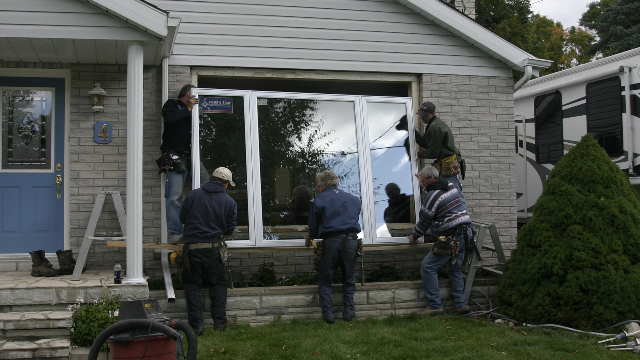 Why we didn't even think about doing it ourselves --- it took four guys to carry it and five to set it in place. 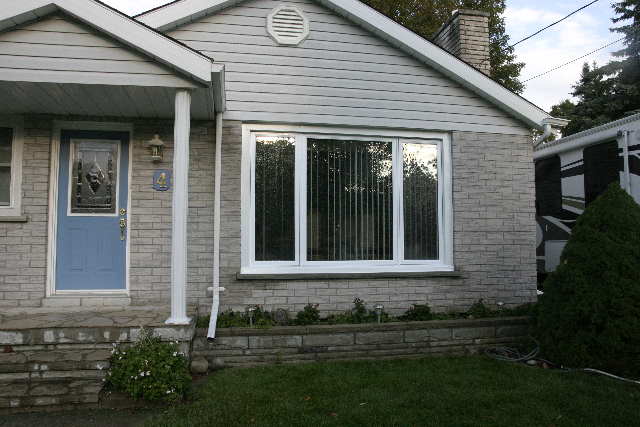 The after picture .... looks like it's always been there.

Each year the first weekend of October is Pumpkin Fest in Port Elgin. The last couple of years they had perfect weather so I guess it was time for mother nature to throw a wrench into the works and give them a rainy one. Ed and I invited our friends Deb and Luc for the weekend as we thought they would enjoy going to the festival with us so even though it was raining we drove to Port Elgin and were surprised at how busy it was. The fesitval consists of a huge car and motorcycle show, a craft show, fair area and vegetable area where they weigh the huge pumpkins. The guys headed to the car show and were pleasantly surprised at how many cars came out in the rain ---- though the number of motor bikes were definitely less than last year. The ladies headed over to the craft show where we spent some time wandering around inside the high school ---- happy to be out of the rain. We also managed to see a couple of the huge pumpkins. 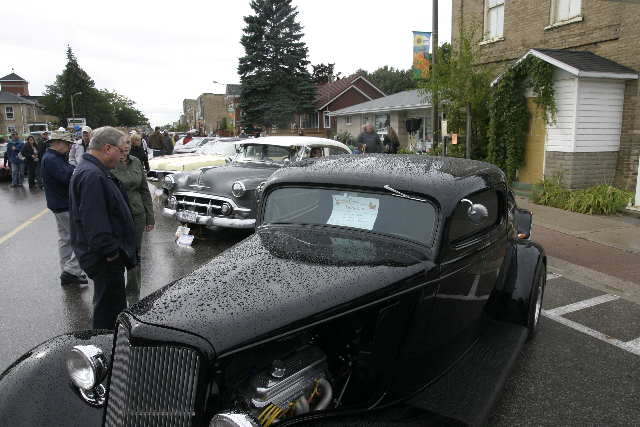 Cars are lined up and down the main street plus several other streets. 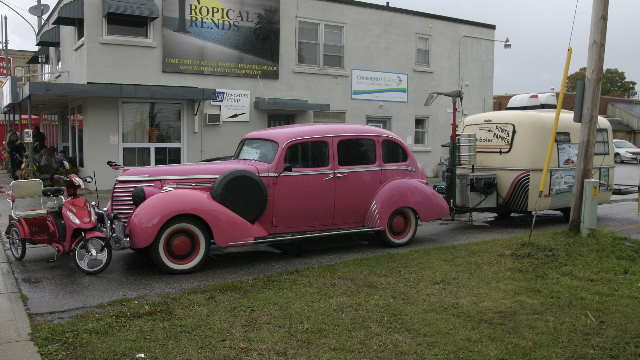 This unit would get attention when ever he pulled into a campground. 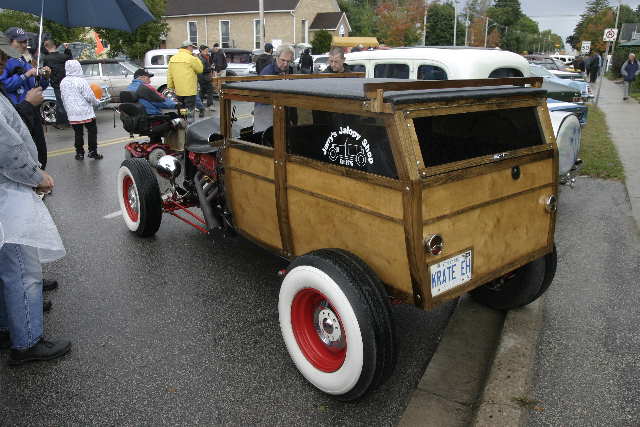 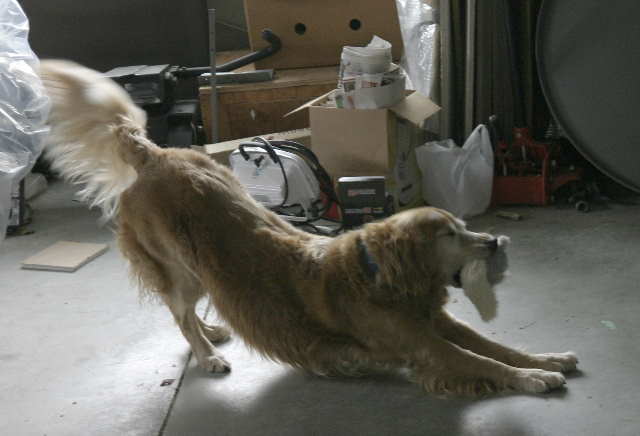 Mom felt a bit guilty leaving the big guy at home so she bought him a squirrel. 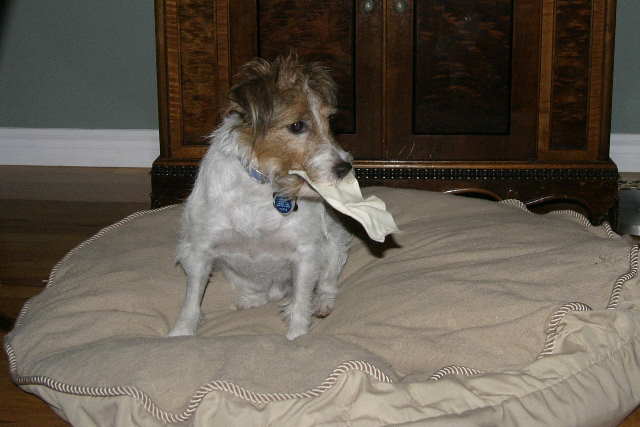 Hairy Pawter took over the dog bed and managed to steal Zaph's chewie. Zaph barked a "mommy help me" bark so Deb and I came to the rescue --- Hairy got a more appropriate sized chewie and Zaph got his back. For some reason Hairy really liked Zaph's dog bed and spent most of the weekend sleeping on it.

Earlier in the summer I had mentioned to my backyard neighbour that I thought I'd like to start doing some volunteer work next spring. She then told me about a garden area that is cared for by volunteers and they were looking for some new volunteers. So to make a long story short another women and I have been given a garden to take maintain ... hope I haven't bit off more than I can chew. 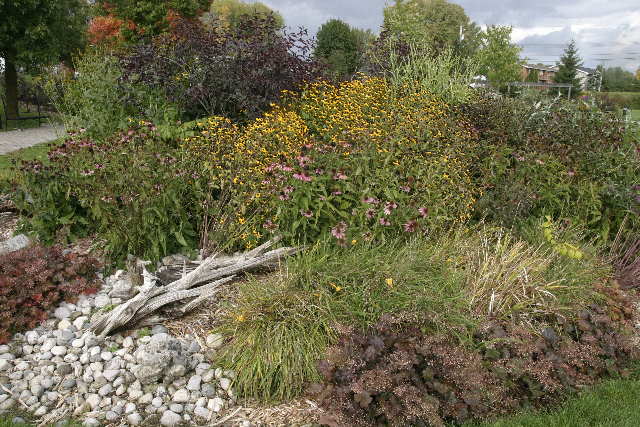 This is not the best photo of this garden but the series of photos were taken so I'd know what plant was were next spring when we start working on it --- think it needs a bit of thinning.