Filing Income Tax is always at the top of the "to do" list when we return from down south and I think it is almost ready to move to the "to done" list --- Ed needs to give it a second look and we can file it. Hooray!!!! Ed is already puttering away at projects on his list --- I know you're wondering how I ended up with income tax and he gets to putter ---- so am I. As the trailer is still under warranty, Ed took it and his list over to the RV dealer on Thursday and we are hoping to get it back all fixed by the end of next week. Over the winter we determined that the main slide was nice and square but the hole in the body of the trailer is more like a parallelogram. The slide goes in and out nicely until you take the trailer for a drive and the slides settles. Then the first "out" requires a bit of pushing in one corner. The dealer says the factory guys can fix the problem --- apparently they've seen it and fixed it several times. Hopefully the other problems will be easily remedied as well. I'm taking advantage of the trailer being away and am parking my car in the garage. This isn't very exciting for most people but it is for me ---- after approximately 20 years of owning homes with garages I'm getting to park inside.

Zaph has decided that a new season has finally arrived ---- that is "swimming in the creek season", one of his favourite. Within five minutes of arriving at Anne and Victors house, Zaph was wet --- it was a self-initiated dip. After being there a few hours I noticed happily that Zaph was drying off and made a comment to him, within minutes he was happily wet again. Life is so simple when your a dog. 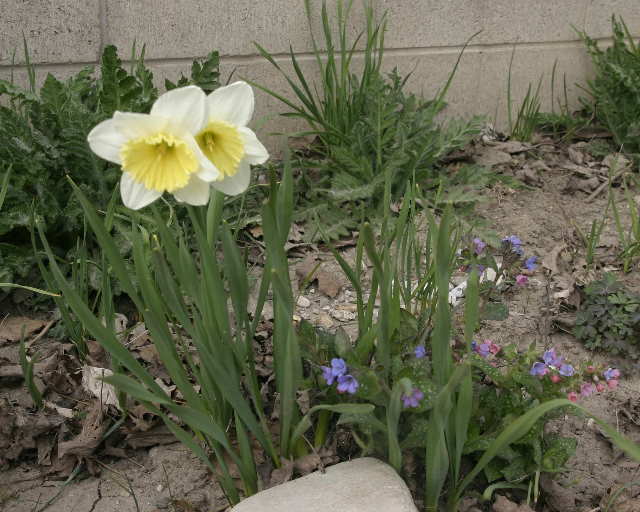 On the south side of my house I have a few flowers in bloom --- a couple of pale daffodils as well as few other early spring flowers. Ed's not really happy that some of them are in the middle of the lawn.

The last couple of days have been a blur of unpacking and organizing though we did manage a breakfast at the airport and dinner at Anne and Victors on Sunday. Things have really changed at the airport restaurant --- the ladies that were running it decided that they were ready for a change and gave their notice so the folks that run the airport hired a new fellow. I think he started sometime in December and managed to alienate several of the regulars pretty quickly. Anyway, he's shrunk the menu and is trying to upscale the restaurant so we'll just have to wait and see how it goes.

Monday morning we had doctors appointments about 1 3/4 hours from home so we were up early and received a shock when we looked out the window at the white stuff on the ground and more was still coming down. Think we had close to six inches of snow with more predicted over the day. Luckily Ed was driving because I would have turned around when I reached the main road out of town and it wasn't ploughed. Ed did a great job of driving and got us to the doctors office save and sound in just over two hours. As my mom doesn't live far from the doctors office (plus they didn't have any snow in Burlington) we decided to spend the night coming home on Tuesday morning. 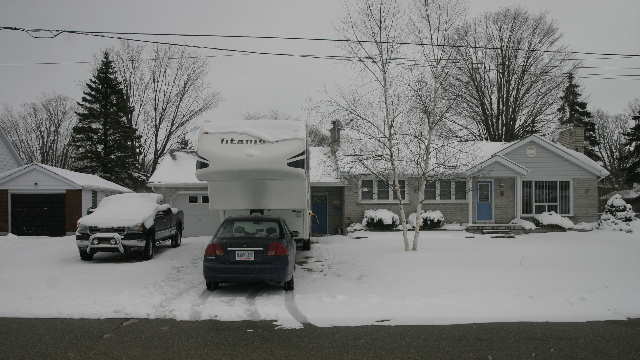 The drive home from Bella Vista was uneventful, just the way we like it. The weather was good, Ed felt good (though he was pretty tired by time we got home) so we did the drive in two days (about 20 hours). The overnight was spent at a Wal-Mart RV Park --- there were at least five other RV's enjoying the accommodation. Today was a glorious spring day, in fact it was still warm when we arrived home at 7pm. Zaph jumped out of the truck and ran around the neighbour --- not sure if he was happy to be home or just happy to be out of the truck. Our wonderful neighbour Ellen came out to say hello and ask if we had eaten dinner yet. When we replied no she went back into her house and returned with a homemade lasagna and Caesar salad fixings --- oh so much better than canned chili.