Fastest Way to Get Ed Out of Bed

I've never seen Ed wake up and get out of bed as fast as I did this morning. I woke up around 7 am, got out of bed about 5 minutes later, wandered into the family room and looked out the window. Nothing was happening so I sat on the couch. About 2 minutes later I heard a motor start, looked out the window and saw a man with a chain saw. I scurried to the bedroom to wake Ed and there he was standing beside the bed with 3 cylinders firing and no coffee in him ---- pretty much a first.

On Monday we had decided that a big old spruce tree that was quite near the house had to be taken down before the addition was built (it would be an easy job now and a much harder job later and the tree probably wouldn't last that much longer). The fellow who owns the backhoe company decided that he could do it and would do it on Wednesday morning --- we just didn't realize that they would come quite that early. Took about a half hour to take the tree down and another half hour to remove the debris and clean up the yard. These guys were pretty incredible. By 11 am the excavation for the foundation was dug and the "surprise" was removed --- there was another truckload of stump and roots from a Maple tree that was removed a number of years ago (we had heard from a neighbour that there had been another Maple tree but didn't know where it was and that the stump had not been removed).

Now we have to plan the barbecue patio which is going to where the tree had been. 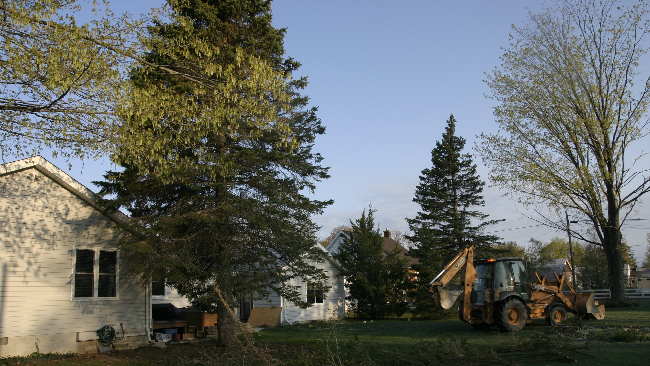 The back of the house before the trees are removed. The big one by the house and two small ones by the workshop were removed. 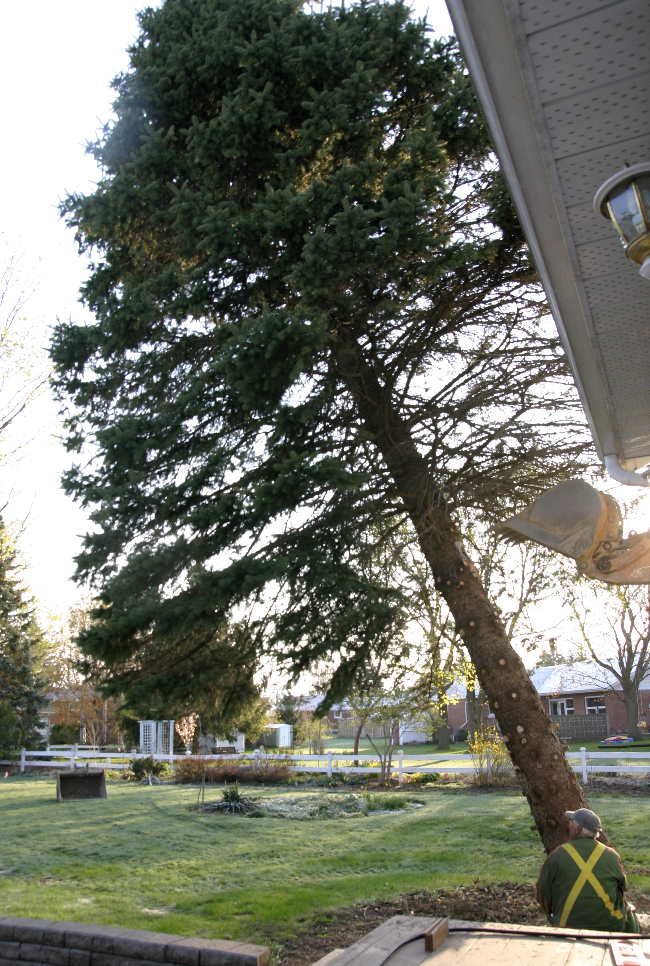 Timber!!!!! The lower branches of the tree were removed, a cut was made in the trunk of the tree, then a push by the backhoe and down came the tree. 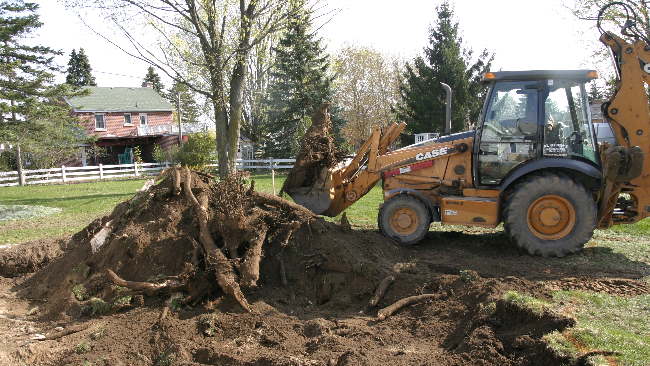 The "surprise roots" were found when he starting digging the hole for the foundation.

The big excitement this past week was the procurement of a new barbecue. Ed has been searching the Internet for information on barbecues since the offer was accepted on the house last fall. After all of his research he opted for a Napoleon made in Canada version barbecue with a infrared sizzle burner and a infrared rotisserie burner. All I know is it cooks food real good and better yet I don't have to cook. 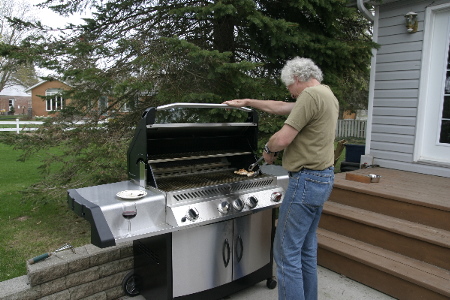 Ed and his new barbecue. 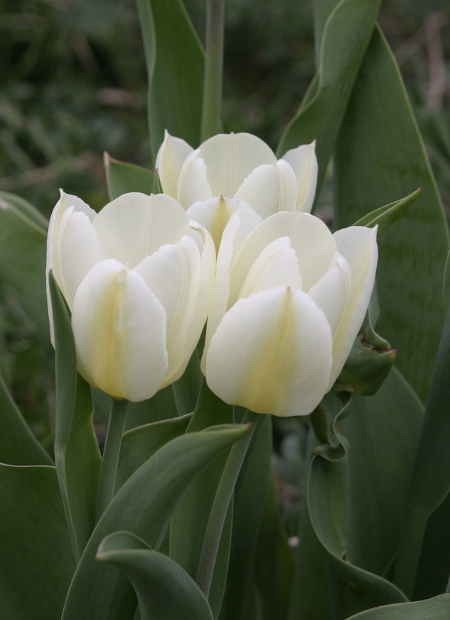 When Zaph and I walk around town we notice all of the beautiful spring flowers -especially our backyard neighbour. So far just a few are in bloom in our yard, but there's lots of buds on the tulips. Should be an interesting garden summer as I try to figure out what is in each bed. 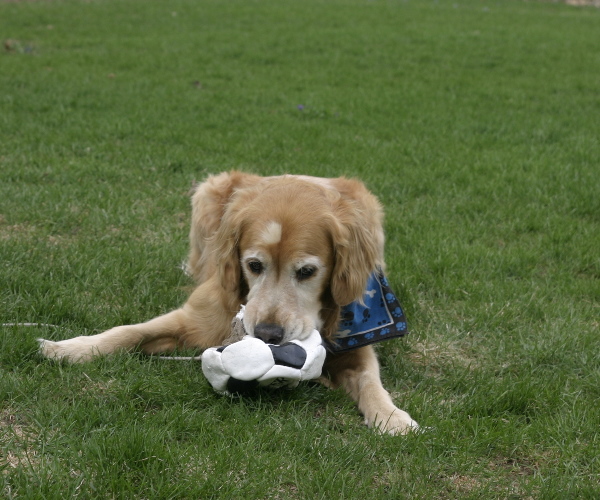 Last Thursday I left Ed and Zaph at home and drove to Brampton (a little less than a two hour drive) to visit my friend Gwen who is at home recovering from a broken hip (the result of her probably last ever ski trip). It's not a complicated drive --- just a half a dozen turns or so in total but somehow I ended up in the village of Cataract --- never even heard of the place so it was a bit of a surprise. I'm usually pretty good with figuring out where I am and determining what I need to do to get to where I want to go but not today. I felt totally disorientated. During the drive I had sneered at the GPS Ed had set up in the car and wondered how I could talk him into removing it. Now I was looking at it as my saviour. After pushing a few buttons and selecting several incorrect options I finally got it to tell me how to get to Brampton. By the way Gwen and I had a great visit. Since I was now in the "south", I drove to my mom's, spent the night and the next day with her. I managed to drive home from there with no unexpected detours.

Over the winter Ed thought about things he wanted to do to the house we had purchased in the fall (I don't think the house was "real" to me as I didn't think about it let alone any changes to it.) One of the changes was rearranging the living/dining room. The room is not large and we put our rather large dining room table, my desk and keyboard as well as a couch, coffee table and chair in it. To say the least it was a little crowded and very disjointed looking. The finished basement was pretty much empty and Ed wants to create a "theatre" down there. A home for the living room furniture letting us move the dining table to the larger living room section of the room and move my stuff into the dining room section. Sounds pretty simple, right? The couch was purchased along with the house so we had no experience moving it. It's not a heavy couch just a very long couch and like all couches it doesn't bend.

As you can see the living room entrance is at a right angle to the front door. (click on the floor plan and you'll get a readable version). After many attempts at wiggling the couch through the two door ways it was decided that it was impossible. Plan 2 was to exit via the dinning room entrance then head straight down the hall and out the front door. Almost worked --- the hall narrows a little just past the hall to the bedrooms and the couch would not fit through it. Luckily there was a 3rd option --- exit into the backyard and carry the couch around the house to the garage and down the stairs into the basement. Ed and Victor were happy when the couch landed in the basement and looked good in its new home.

Ed and I did a happy dance on Saturday when the last of the snow disappeared from our front yard --- it's nice seeing green grass again. Zaph was a little disappointed as he was enjoying sitting and rolling on the snow --- don't get it but it made him happy.

Spring Seems to be Here

It's hard to believe that we've been home for a week, the time has really flown by. Except for the windows the trailer is nice and clean, everything that has come in from the trailer has managed to find a home in the house, the hot tub has been "unwinterized" and is open for tubbing (hooray!!!!!), Ed has made a list of all of the things he wants to do to and around the house (most of the ideas are his) and I've done the first pass on the income tax. No wonder the week has gone quickly.

One morning we had the pleasure of watching some Cedar Waxwings eating juniper berries in our yard--- unfortunately the camera with the bigger lens was still in the trailer. Robins appear to be the most abundant bird in the area so that must mean that spring has arrived. The pile of snow in the front yard is almost gone --- the only part left is where it was piled when the driveway was cleared. 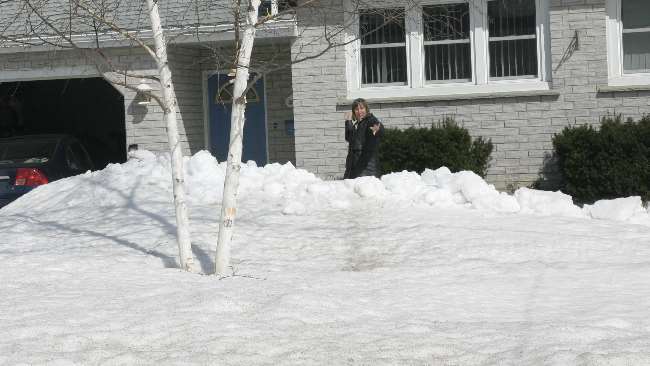 There's at least a couple of feet of snow in the front yard --- not the best snow for snow balls but you could still make them. 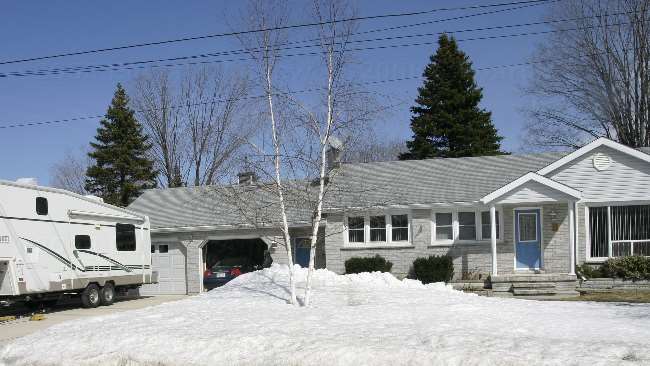 The snow is melting and parts of the grass is showing .... there's less snow in the backyard. We had a service clean the driveway while we were gone and they piled the snow along the edge of the driveway making deeper snow.

Hopefully the snow will be gone in a few days as the forecast is for above freezing temperatures.

Zaph and I really missing the beach.

As we were about 15 hours from home we decided that we would push and get home in two days. April 1st was one of those long, boring driving days. The first couple of hours were on the Natchez Trace while the rest was on big highways. All in all an uneventful day with a night at a Wal-Mart just north of Cincinnati.

This morning we got on the road early and as we were driving through Dayton in a construction zone and car pull up beside us and pointed at the trailer. We got the message that there was a problem and pull over as soon as the construction zone ended. Generally if you have a problem, it's a flat tire, the hand rail sticking out, a cord hanging out or something else like that. As none of those items were evident, Ed stood back and looked at the trailer and noticed it was leaning to one side. Looking under the trailer he saw that a spring on the passenger side was broken. Luckily we were stopped just before an off ramp and there was a gas station with a reasonable sized parking lot at the bottom of the ramp. Borrowing a phone book, Ed found the number of a spring shop, it was only a few kilometers away and better yet if they didn't have the correct spring they could make us one. Ed crawled under the trailer and with only a few curses removed the broken spring then drove the truck to the spring shop and picked up a new spring (they had one that just need a minor change). It just took a few minutes to put the new spring on and we were on our way. The whole process only took two hours. If we had gone the route of a tow and a shop repairing the spring we would have gotten at least a day in Dayton.

The border crossing was a breeze. The guard asked for the truck license plate, when we left and if we had any alcohol. The fellow in front of us wasn't so lucky he was directed to the inspection station.

As this was our first trip to Walkerton from the Sarnia border crossing with the trailer the route was untried. Luckily Ed was more awake than I was a noticed a sign with a bridge height that was lower than the trailer. We pulled into a farm driveway to turn around and the farmer came out and gave us directions around the bridge. When we arrived home we parked the trailer in the middle of the driveway, grabbed a few necessities and went into the house to collapse for the night.