A Walk on the Beach

Once a week Zaph and I go for a walk with Sue and Maggie and this weeks adventure took us to the beach in Kincardine. 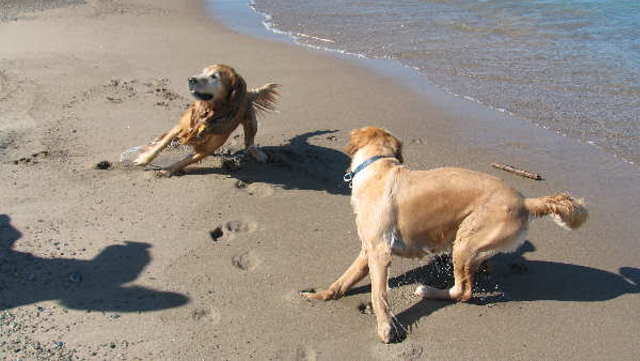 Zaph and Maggie ready to rescue the stick from the "high seas". 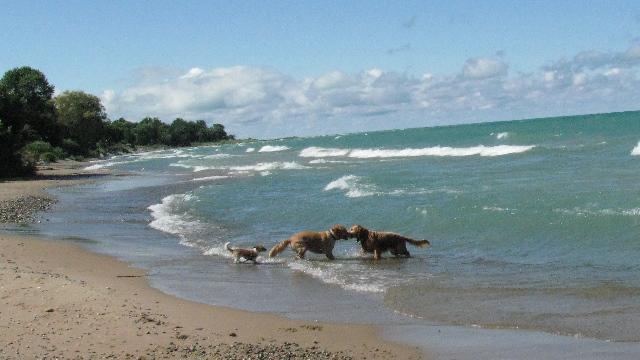 Zaph and Maggie playing tug with a stick while Pepper looks on. Pepper is a Jack Russell / Sitzu mix we met on the beach. It was hilarious watching him interact with the big dogs --- she thought she was their size. 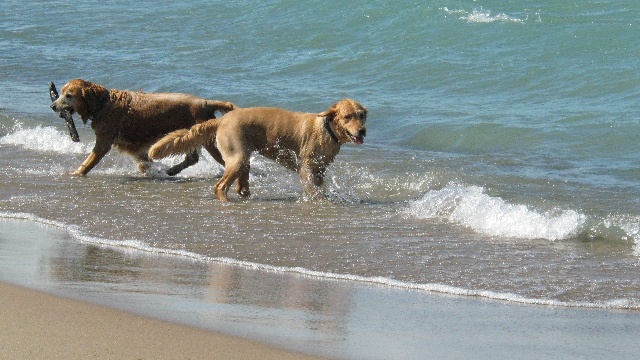 Maggie usually gives in and lets Zaph win. It's hard to believe but Maggie loves the water more than Zaph does.

Cutest Zucchini in the Patch 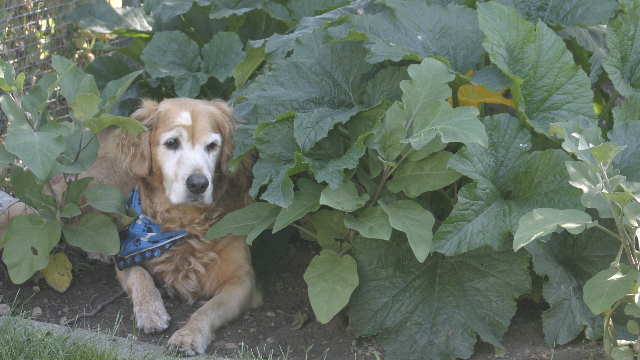 Couldn't resist taking this photo of the cutest zucchini in the patch. Earlier in the summer this section of garden was fairly open and Zaph enjoyed laying on the cool ground. He's not going to let a zucchini plant keep him out of his favourite spot!! 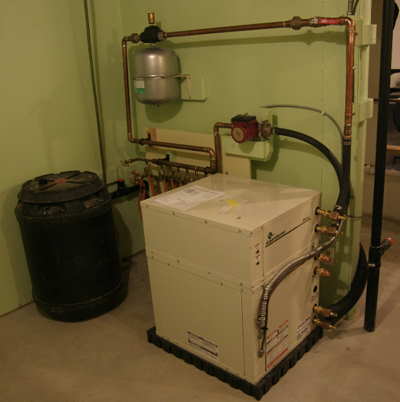 Hooray!!!!!!!!! Victor and Anne's furnace (heat pump) is installed and working --- should guarantee a warm winter. They have spent the last two winters in the house with just an electric construction heater (read big) and a propane fireplace. Ed and Victor are very proud of themselves and the good job they did ---- first heat pump installation for both of them.

We've had some really strange weather this summer. It's been a cool summer and mostly dry for the Walkerton area while a couple of hundred kilometres south of us it's been cool and wet. Last week saw a severe thunderstorm pass through southern Ontario. Walkerton had a bit of thunder and lightening with lots of rain while Durham 40 kilometres east was on the receiving end of a F2 tornado. Several other location also had tornados touch down.

On Friday a girlfriend from high school / university stopped for a visit on her way to her parent's place in Southampton. Her husband was with her but only stayed for a few minutes as he was going to ride his bike the rest of the way to Southampton, about 50 km. For him that's not a long ride ---- he competes in Iron Man competitions. From Wikipedia "An Ironman Triathlon is one of a series of long-distance triathlon races organized by the World Triathlon Corporation (WTC) consisting of a 2.4 miles (3.86 km) swim, a 112 miles (180.25 km) bike and a marathon (26 miles 385 yards, 42.195 km) run, raced in that order and without a break." I'm still amazed to think that Tom does Ironman as I don't remember him being athletic in university.

Saturday it was off to the Steam and Antique Tractor Show in Paisley. 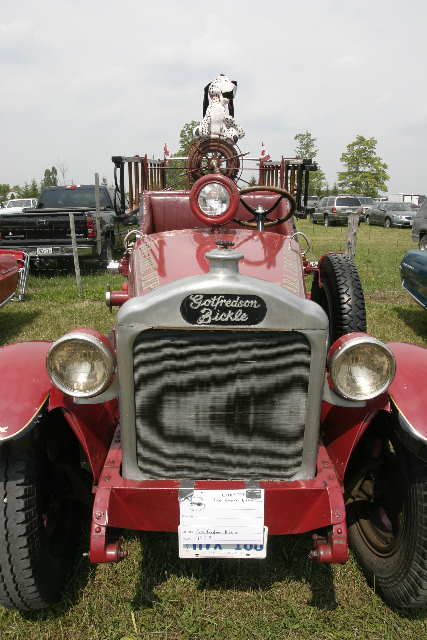 There were old cars 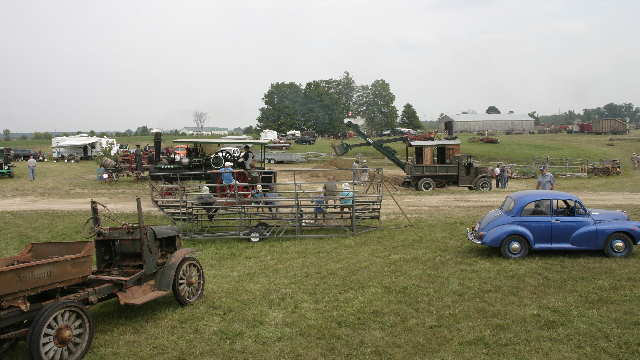 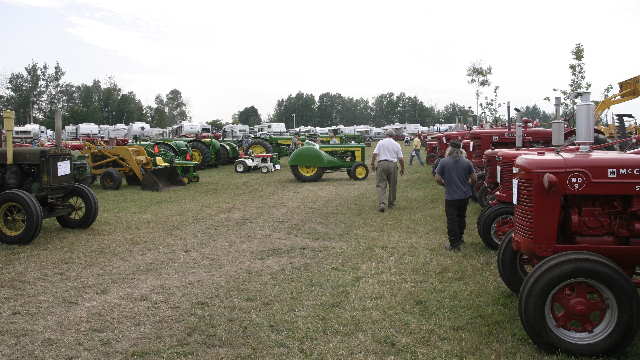 and of course lots of old tractors. 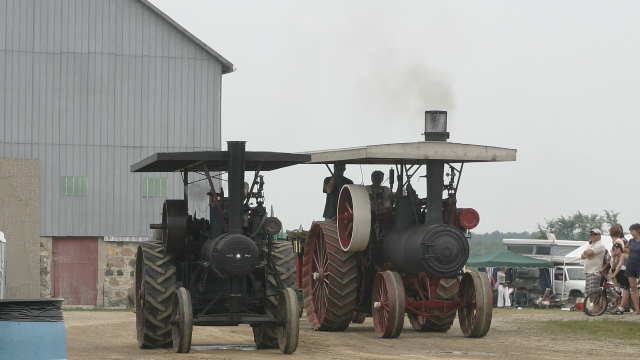 Sunday we drove down to my mom's house in Burlington, dropped Zaph off and headed to Featherstone Estate Winery with friends for brunch. Yummy ...... four types of wine and three courses (rose to start, white with the soup, red with the steak main course, and desert wine with the double chocolate tart). It was a beautiful day to sit on the front porch and enjoy a wonderful brunch. Niagara on the Lake wasn't far away so we decided to go there to walk of some of the brunch. 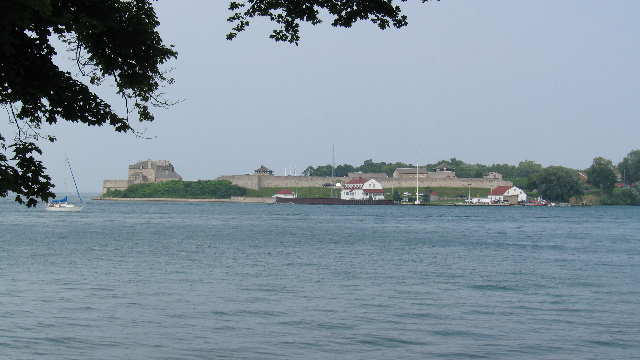 The fort on the US side 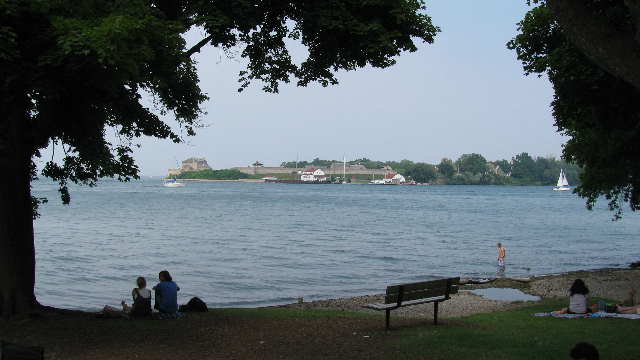 Lots of people were enjoying a beautiful summer day .... one of the few we've had this year 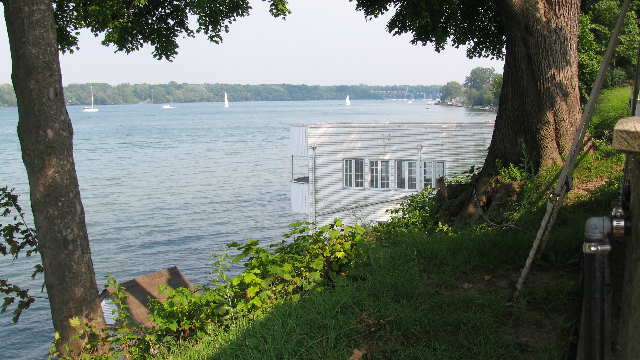 An interesting "boat house"??? with a great view of the water.

What's a visit to Walkerton without a trip to the beach in Kincardine. The forecast for today is pretty miserable .... rain followed by thunderstorms and then maybe some more thunderstorms. It wasn't raining this morning so we decided to give the beach a go --- so did about 10 other people. Zaph said the water was fine and it didn't make any difference to him that it wasn't sunny. Luckily the rain didn't start until we finished our picnic lunch. I felt sorry for the people who belonged to the "wedding" sign, think they probably ended up getting married in the tent instead of on the beach. 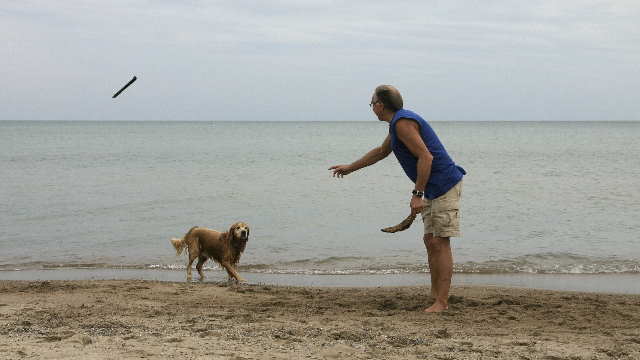 Today Zaph was playing "two stick". First you throw one stick and Zaph looks where you threw it but waits for the second stick to be thrown. Once it's thrown he jumps in and brings both sticks back. 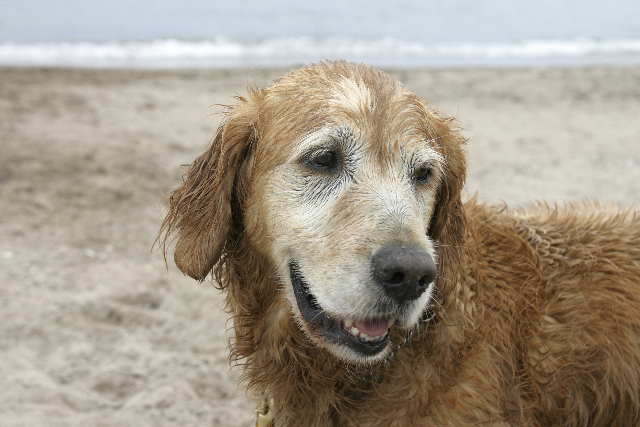 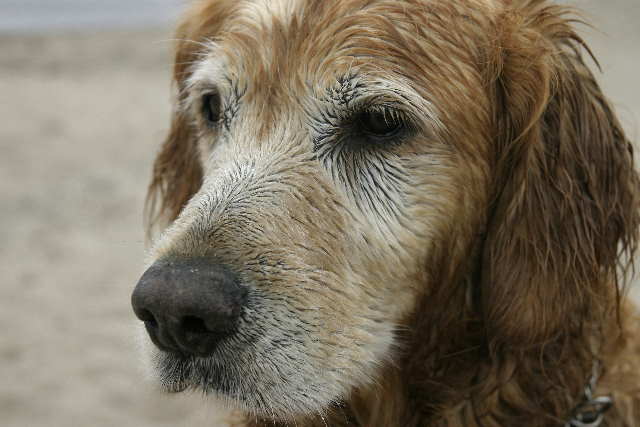 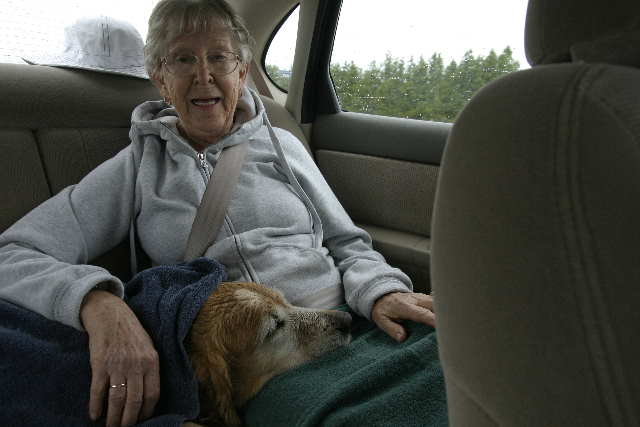 The only way to travel with a wet dog. We had planned a nice long drying walk but the rain prevented that. 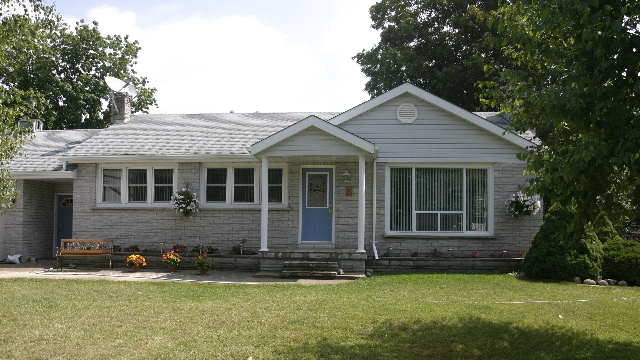 I need to see if I can find a before picture. We removed two gardens, the patio replaced one and lawn replaced the second one (the gardens were below the raised beds). All the bushes were removed from the raised beds as the roots were trying to knock the walls of the raised beds down.

I looked at the date of my last entry and realized it's been a while since I've updated my blog .... guess it means I've been busy. Unfortunately, it hasn't been "fun" busy but "work" busy. In the last few weeks I've done a trip to Burlington to take mom to her eye appointment, done some painting, helped Ed with rebuilding the front garden and laying patio stones as well as the usual chores.

My mom and brother are here for a couple of days and today we drove the scenic route to Tobermory. First stop on the drive was Port Elgin, a very scenic town. Then we followed the Lake Huron coast north through Southampton, Sauble Beach, Oliphant, and a number of other small towns. I had a country road map book and kept directing my brother down on the back roads --- some were nice and some were not so nice. 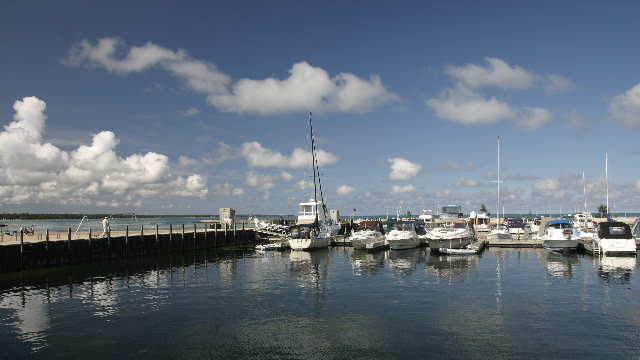 The harbour at Port Elgin. 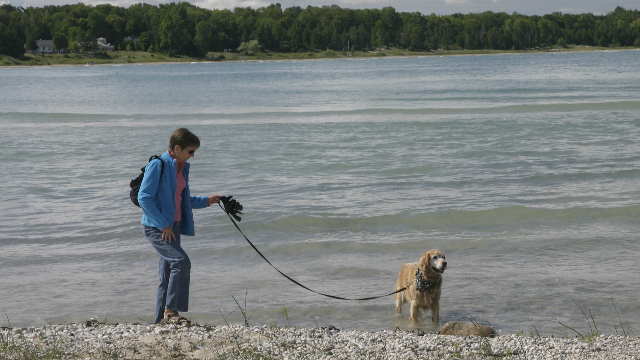 Some one couldn't wait to get in the water. The people sitting in the backseat with Zaph voted against swimming ... something about sitting with a wet dog. 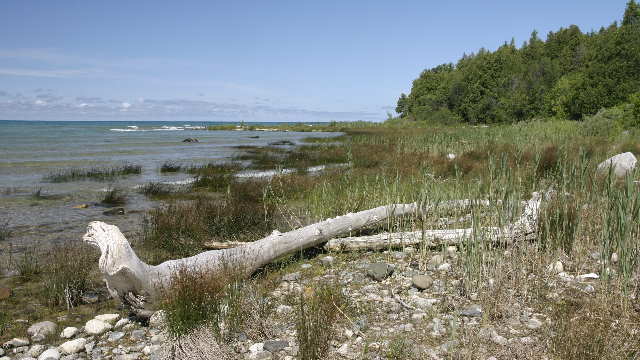 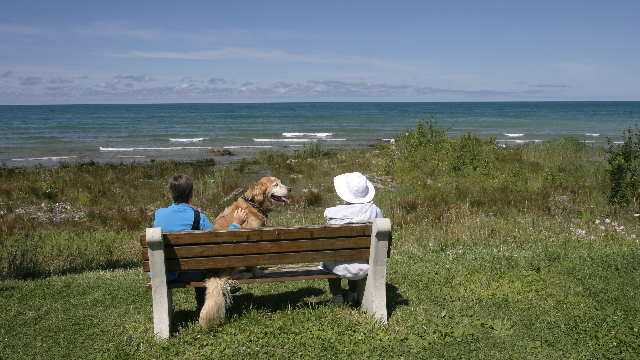 We convinced my brother to walk back to the car and pick us up. Mom, Zaph and I enjoying the view. 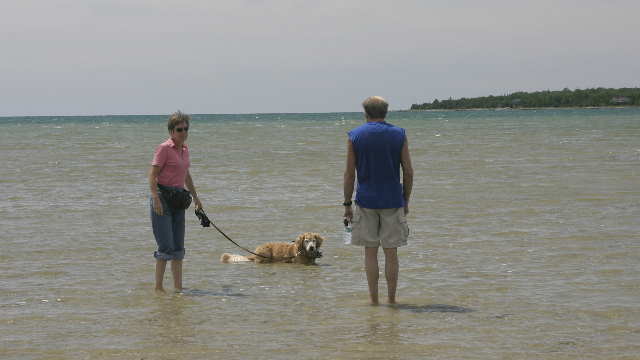 Singing Sands just outside of Tobermory. Zaph was determined to get a bit wetter and laid down in the water. You have to walk a long way out before you find water deeper than a few inches. 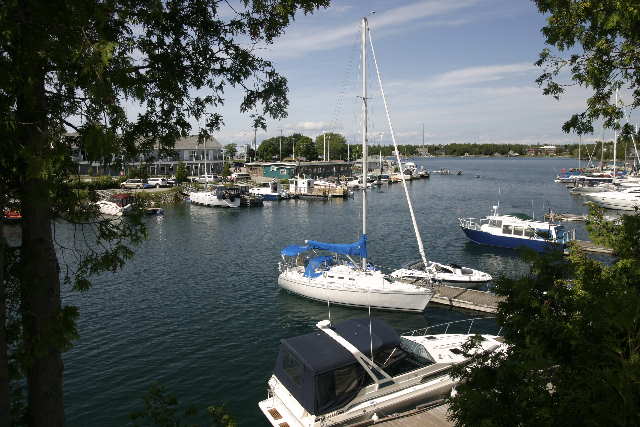 The harbour in Tobermory. 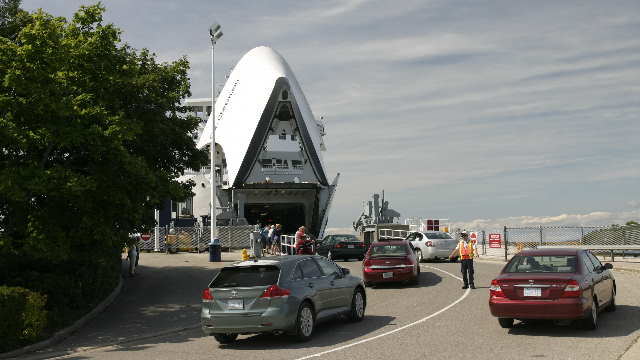 One of the draws of Tobermory is the ferry to Manitoulin Island. They can pack a lot of vehicles onto the ferry. 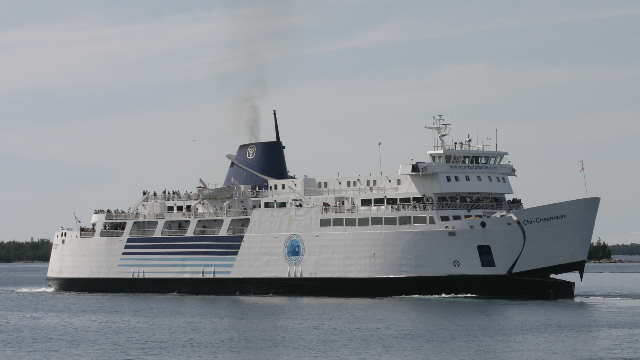 Heading out .... the front nose is almost closed. Sort of looks like it's going to eat it's way through the water. 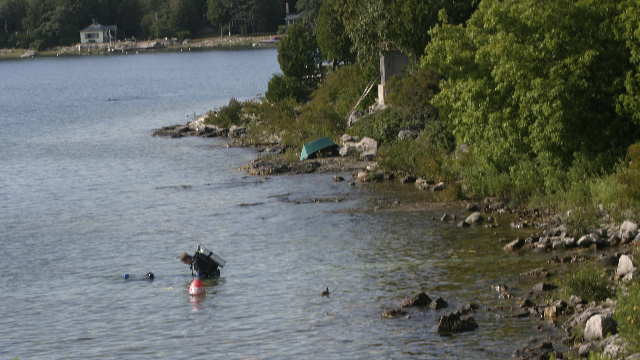 Another draw to Tobermory is the diving. Don't know why anyone would want to dive in cold water but they do. Fathom Five National Marine Park has a number of "ship wrecks" for the divers. This spot in town is a practice area for the divers. 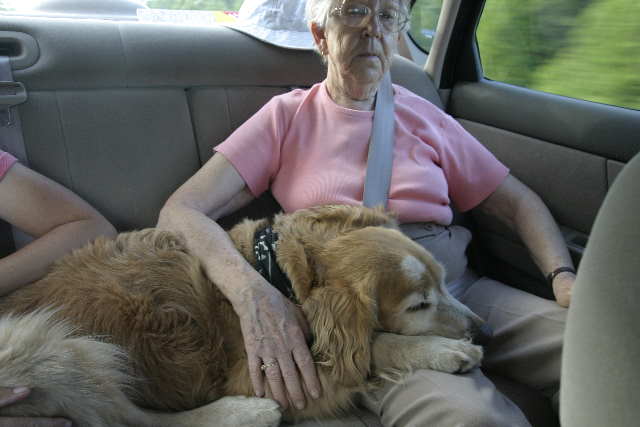 Heading Home. I wonder who's more tired gramma or Zaph.