Labour Day weekend was amazing weather wise this year so we just had to go to the beach. Zaph was due for a bath so he might as well have some fun and get real dirty before he has to suffer the torture of a bath. For someone who loves the water he really doesn't like baths. As usual there was lots of stick throwing but not as much fetching. Either Zaph couldn't see the the stick in the water with the bright sun or it was too cold and he didn't go into the deeper water or he just didn't feel like chasing the stick. 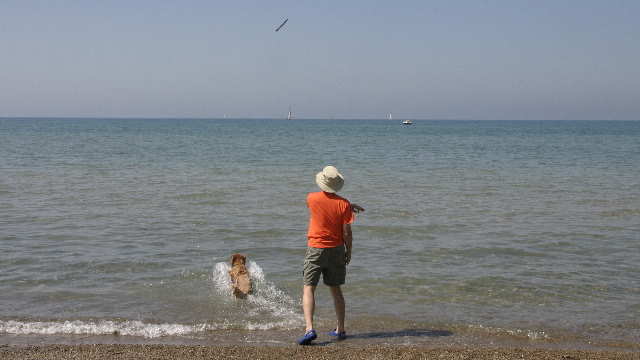 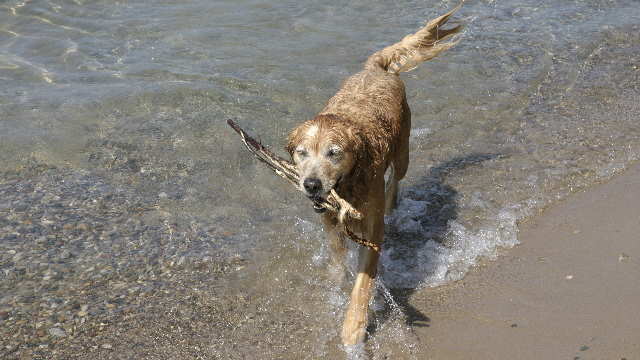 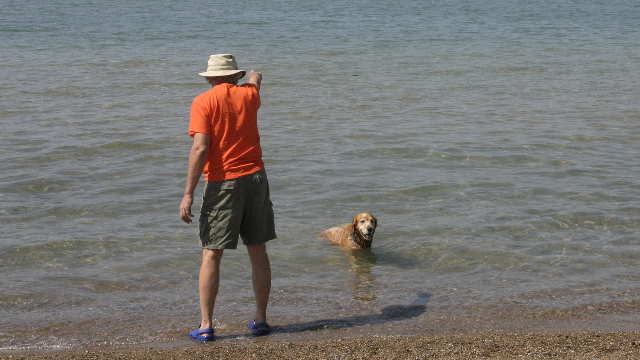 Ed trying to get Zaph to go after the stick.

Trying Out the Trailer

Ed has all of the changes done to the trailer that he wanted to do so it's time to try living in it. First trial is to live in the trailer while it is parked in the driveway. 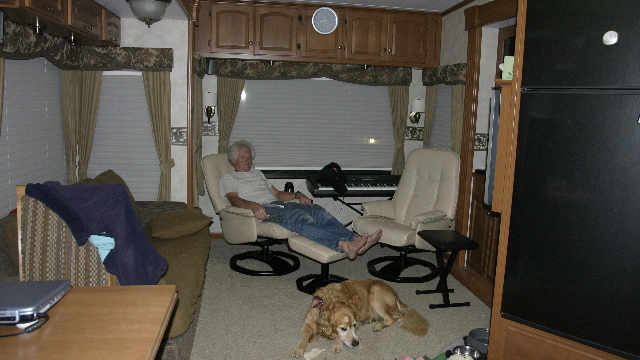 So far so good. Everything seems to fit .

The past few days were painting days for me and helping Victor days for Ed. Monday afternoon was spent washing walls and removing objects from the surfaces I was going to paint. Monday evening I met a girlfriend that I haven't seen for over a year so there was a lot of catching up to do. Donna and I have known each other since grade 9 and it's her fault that Ed and I are together .... we met at her wedding, maid of honour and photographer. It was a pleasant evening so we sat on the patio of a restaurant across the road from Lake Ontario --- good people watching spot. Tuesday and Wednesday mornings were spent painting. The bathroom isn't very big but it was a bit fiddly. Ed and Victor were unable to work on the greenhouse windows but found lots of other things to do. Ed was sore and stiff on Wednesday as they had spent the day on the air plane hanger roof changing popped nails to screws --- now doesn't that sound like a lot of fun.

Our friend's (Colin and Margaret) daughter (Shelly) is expecting a baby at the end of October and today is the baby shower. My first memory of Shelly was when she was about a week old. Colin had called Ed and invited us up asking Ed to bring his survey equipment --- Colin had a property that he wanted Ed to check something out on. When we arrived, Margaret said Shelly is sleeping so everything should be fine. Then Colin, Margaret, Cort (their toddler at the time) and Ed climbed into a vehicle and left. Here I was alone with a new born and I didn't know thing about babies. Every five minutes or so I would get up and stand over the bassinet and place my hand on Shelly to make sure she was still breathing. Luckily she continued to breath and slept the entire time Margaret was gone. I think the shower was a success, everyone appeared to have a good time and Shelly received a lot of wonderful gifts. 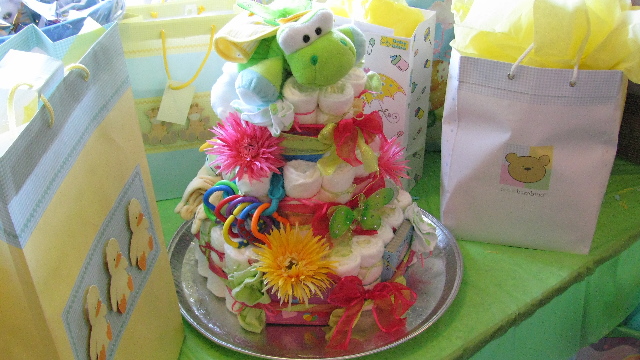 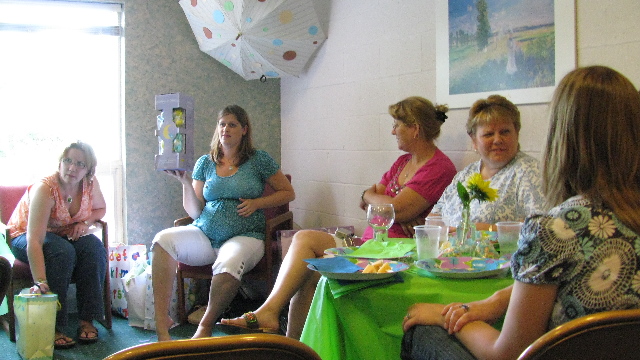 The mom to-be opening presents. Starting at the left is Sherri-Lyn, Shelly and Margaret (grandma to-be)

A Garage That Can Hold Cars 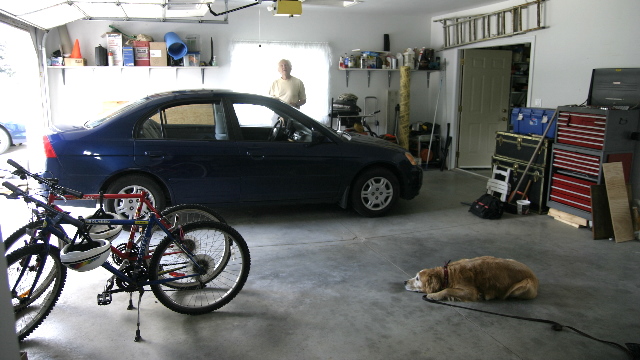 One of the many events going on this weekend is the Paisley Steam Show and as Paisley is only 15 minutes north of us we decided to check it out. This is definitely one of those events where big boys go to play and show off their big toys. The show consists of steam demonstrations, tractor pulls, antique tractors, cars and trucks, a parade and the other usual fare that gets attached to any show. 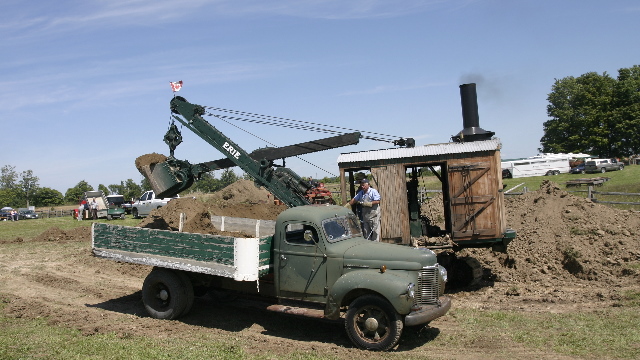 One of my favourites was the old steam shovel. 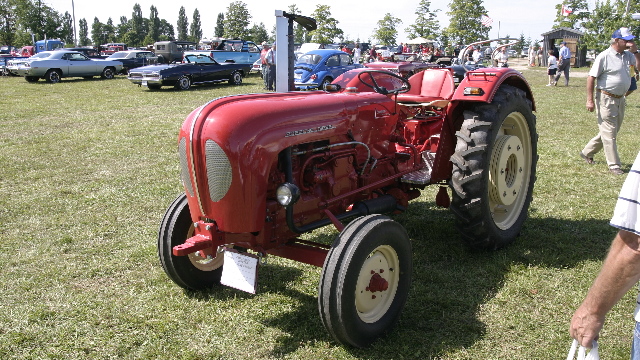 Ed quite liked the old Porche tractor ..... didn't know Porche had ever made tractors. 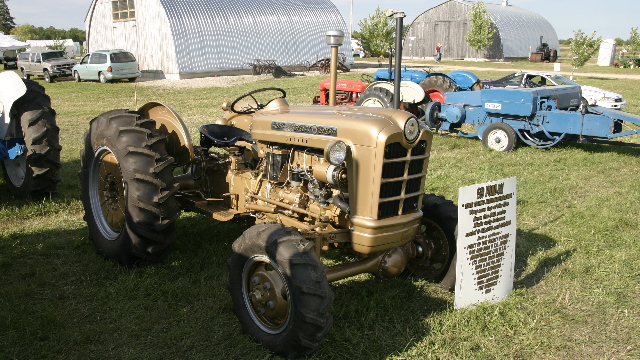 "The Gold Demonstrator", an 1959 Ford 881 was another of his favourites 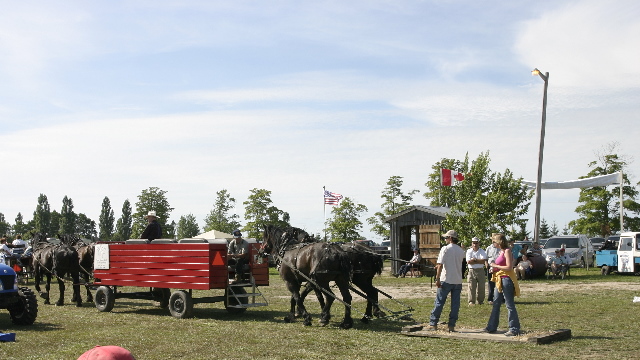 The parade included horse drawn, steam powered, diesel and gas powered equipment. The announcer told you a bit about each vehicle before it proceeded down the parade route. 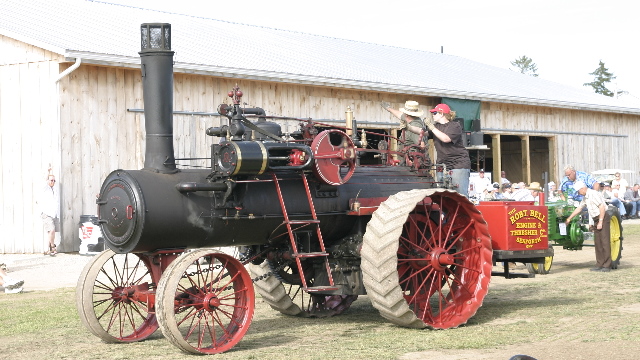 One of the steam tractors .... look it's passing a John Deere tractor. 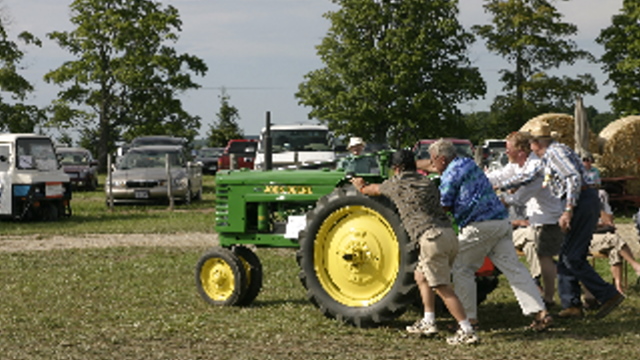 Yesterday we drove to Burlington for an overnight stay at my moms. Somehow Ed managed to tear himself away from the million projects he's working on and come with me ....... maybe it was the enticement of visiting a couple of his favourite stores. My mom's 85th birthday is coming up soon so we bought her a barbecue --- works better than the old one.

Can't Believe What People Will Do

It's been a pretty quiet week. Ed is still working on the trailer .... he put the rack on the back and installing the tool box and bikes on it. I know this stuff needs to be done but he seems to be having a lot of fun playing with his welder and other tools. The good news for me is he's actually starting to think about the items on my list. Maybe we'll get the trial run done this month or at least the trial night in the driveway.

I called my mom the other day and she told me that someone stole her barbecue. I find it really hard to believe that someone would steal a barbecue. My mom lives in a modest house in a modest neighbourhood and the barbecue was an inexpensive 2 burner unit that was at least five years old. The thief either hopped the back fence or walked up her driveway, opened her gate and walked into the backyard right up to her back door and took the barbecue, cover and all. All I can think is that someone walking through the back field noticed the barbecue and suddenly decided they needed to barbecue something and didn't have a barbecue of their own. At least I know what to get my mom for her birthday that is coming up soon.

Colin and Margaret left this morning and are driving north to the property they purchased off the west arm of Lake Nippissing. Margaret, thanks a million for all of your help. Everything looks great and I had fun. Zaph says it was worth having a bath in preparation of your visit since you didn't have an allergic reaction and didn't even need an allergy pill. He also says Mexi can come back as she was nicer to him this visit. Splash is always welcome to visit as she's always nice to him.

Even though there's still 2 curtains and a valance to make for the "theatre" I'm happy with what we accomplished. We may not have sewed the last 2 curtains and the valance but we know how we are going to do it and that's more than half the battle. Can't wait for the next shopping trip and the next sewing day. 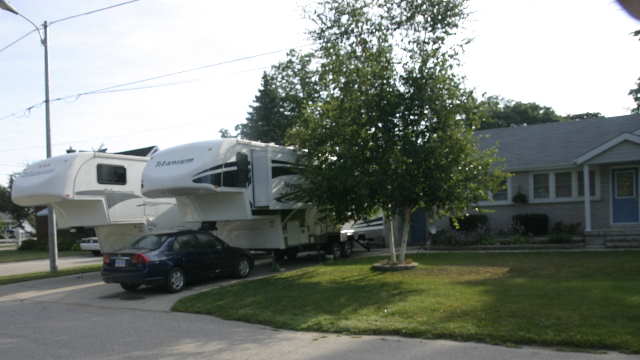 The Agnew RV park. Colin and Margaret's trailer is on the left.

Just about every Sunday morning Ed and I go to the Saugeen Municipal Airport for breakfast and a visit with our friends Anne and Victor and a number of other regulars. As Colin and Margaret know Anne and Victor but haven't seen them in years they decided it was worth getting up early and going for breakfast. After a hearty meal and a nice visit we opened the "sweat shop". Margaret was in charge --- she did all the cutting, gave me instructions on sewing cushion covers for the couch in the trailer and sewed the curtains. Good thing I got the easy job as it's been years since I have sewed, in fact I was impressed that I remember how to thread the machine and make it go. The first seams weren't the straightest but I was getting better just before I finished. I said little prayers of thanks that my material was easy to sew each time Margaret cursed as the curtain material fought her.

The boys had a pretty easy day. Colin made an appointment for an oil change for his truck but found out that the hoist couldn't lift the truck when he got to Canadian Tire --- he wasn't a happy camper. Colin and Ed took the three dogs Zaph, Splash and Mexi for a walk, Splash walked behind the guys wanting to go home to mommy, Zaph ran ahead as usual and Mexi decided to be a "big dog" and stayed up front with Zaph. I wish I could have seen that. 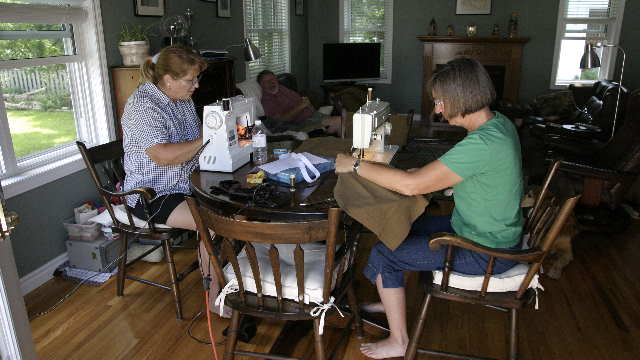 The ladies in the "sweat shop" hard at work. 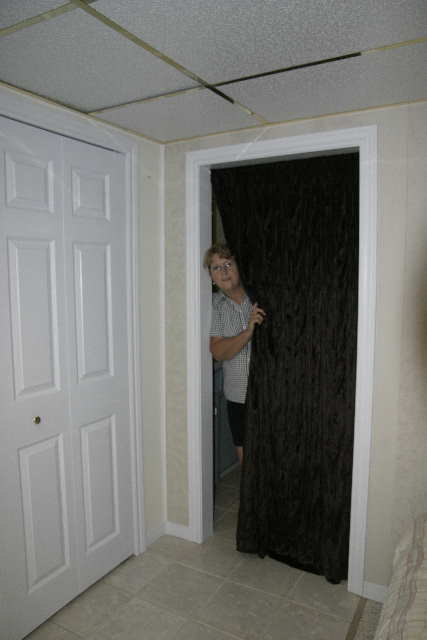 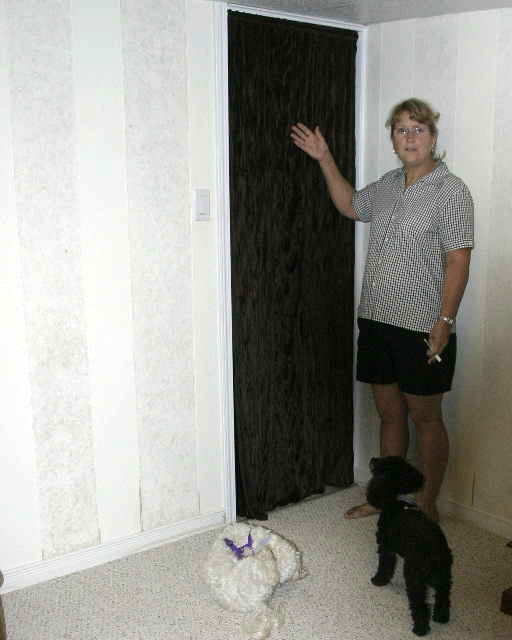 Splash wants to know what's behind Door Number 1. Mexi is more interested in cleaning her butt. 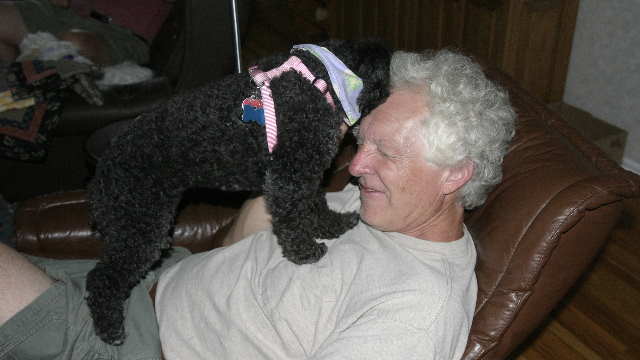 I love you Uncle Ed. 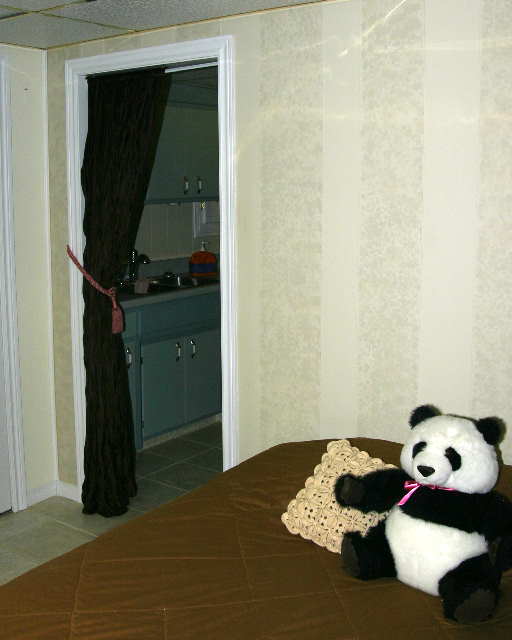 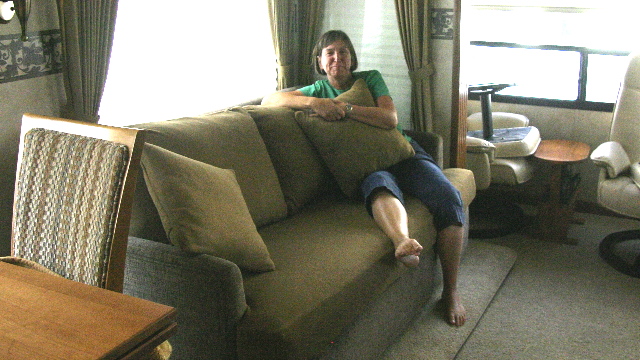 The couch in the trailer with the seat cover (Margaret sewed it), and the cushion covers (I sewed them). As Zaph is allowed to sit on the couch, covers are easier to clean than the couch.

This is the big weekend .... our friends Colin and Margaret are stopping on their way north and Margaret is going to sew the "theatre room" curtains. Margaret loves to sew so it is a win win situation for both of us, she gets to do something she really enjoys and I get my curtains. When the material was purchased I bought one yard off a second bolt of the fabric, this was OK as it was enough for the small basement window. Margaret decided that this was the curtain to start with. When the material was being cut Margaret realized that sewing the curtains may be a little trickier than she thought --- the material is stretchy and a little slippery and not at all co-operative. After a bit of cursing the curtain was completed and I think it looks beautiful. 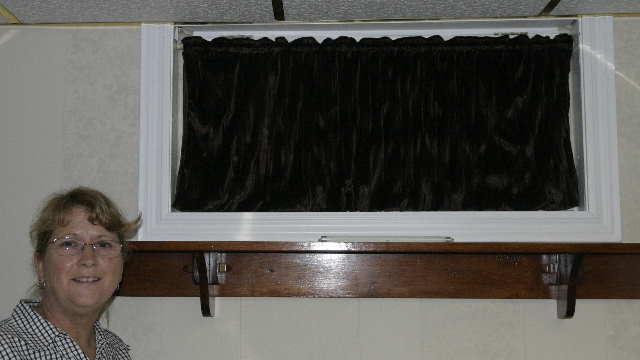 Margaret and the curtain.

Colin and Margaret have two little dogs, Splash and Mexi. On the last visit Mexi was not impressed with Zaph and screamed at him and wouldn't let Zaph get near Margaret. This visit was a different story. At first Mexi was a little nervous but she didn't scream --- our ears were very happy about that, and after a while her and Zaph even played with each other. Mexi wasn't as nice to my hardwood floor. Margaret, the dogs and I had gone into the house when Colin called Margaret and asked her to go outside. A few minutes later I went outside as well leaving the three dogs alone. When Margaret and I went back inside we found a little present showing us what Mexi's thought of being left alone. Luckily hardwood cleans easily and Mexi is very cute.

About an hour south west of Walkerton is the town of Bayfield. This is another one of those cute touristy towns on Lake Huron. One of my cousins lives about 20 minutes further south so we met for a late lunch in Bayfield and had a nice visit. 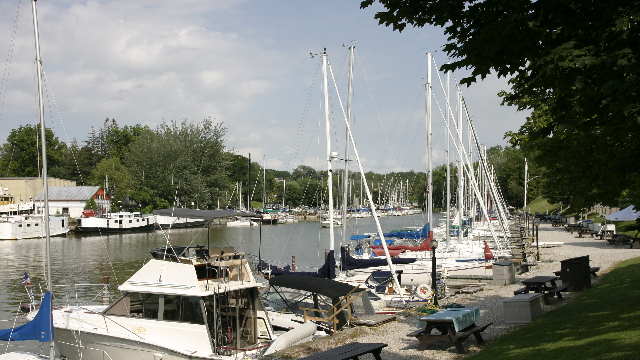 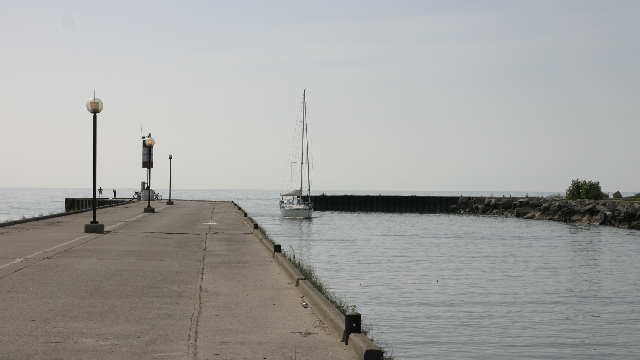 Watching a sailboat come into the harbour. 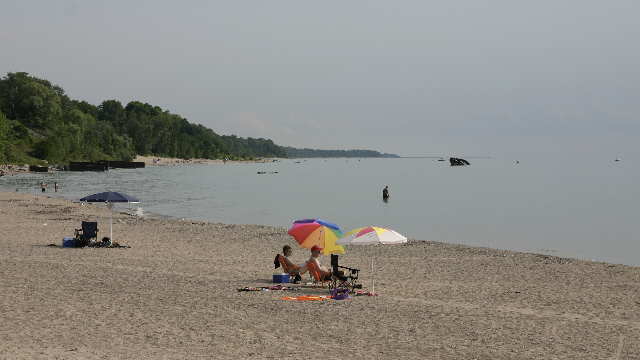 The beach at Bayfield.