Yesterday I drove to Fergus to attend a baby shower for Sherri-lyn, my friend Margaret's daughter in-law. Margaret and her daughter Shelly were hosting the event. 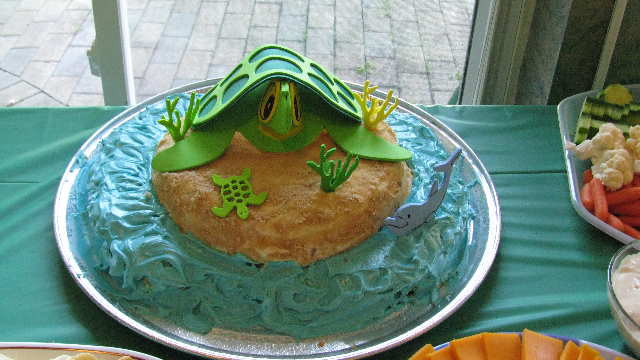 Sherri-lyn and Cort have chosen the theme "Under the Sea" for their baby's room so the theme went forward into the shower. Shelly made this very cute "turtle cake". 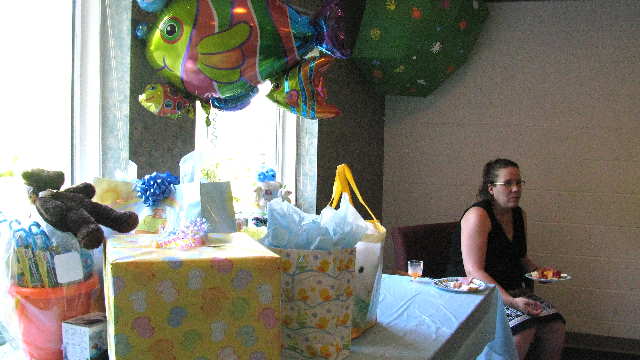 Sherri-lyn with all the presents. 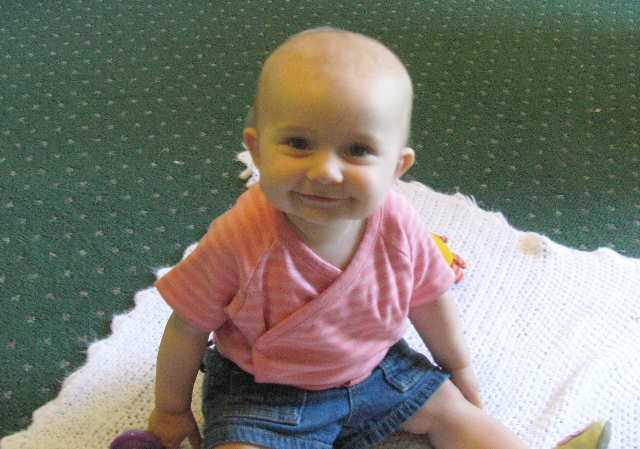 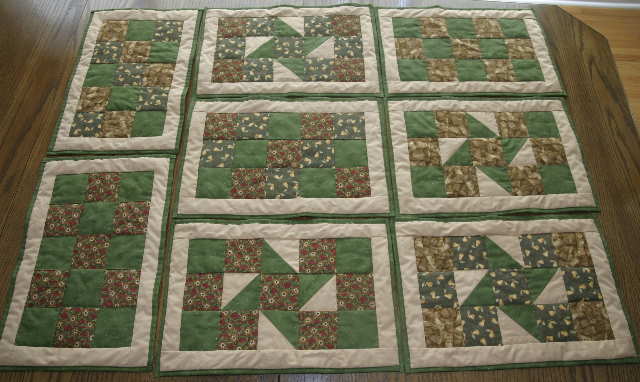 At long last ... the quilted place mats. Now I just have to remember to never use them when I serve something with tomato sauce and have club soda nearby when I serve red wine.

I had such good intentions when we headed south last winter ---- a book on quilting and all of the materials required for making place mats were loaded into the trailer. When we returned home in April, the book and materials were unloaded from the trailer, but the good intentions were sill there and the place mats were begun before the end of April and finally today they are finished. Far from perfect but quite a learning experience in both quilting and sewing and not all bad as a lap quilt is in my future (hopefully with fewer oopses).

The plane stayed over night in the Interforest hanger, so when we went to the airport for Sunday breakfast with Anne and Victor we wandered over to have another look at the plane. 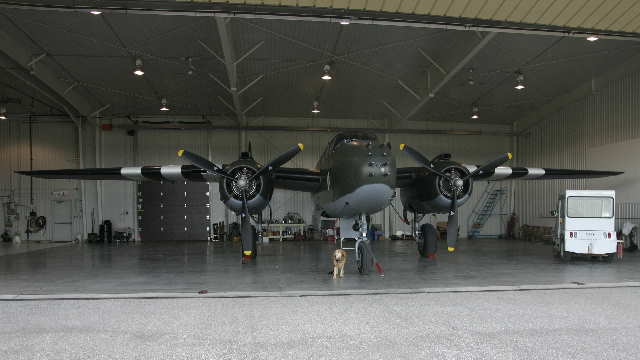 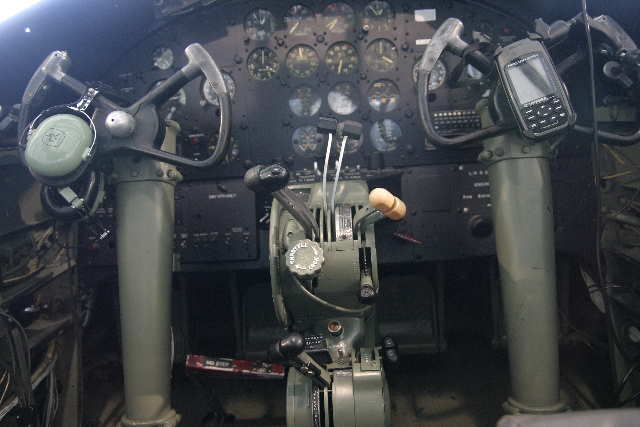 The cockpit of the plane.

Moving the plane out of the hanger .... it was watched very carefully as the tail only had a couple of inches to spare. 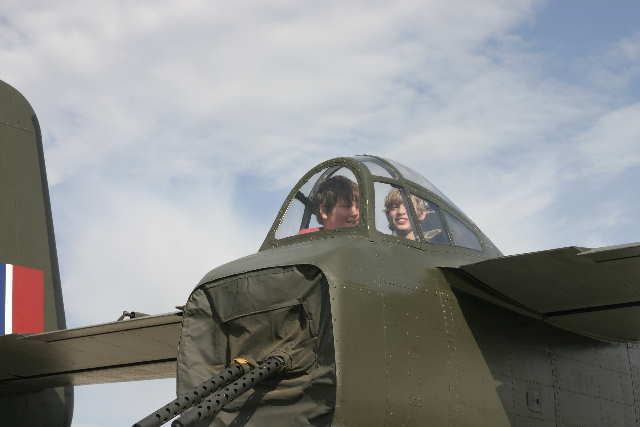 These two kids had flown into the airport with their dad for breakfast and got an unexpected ride in the tail gunner seat when the plane was towed down the runway.

There's an small Amish community about 15 minutes north of us and they had an auction today to raise money for their school. We not really looking for anything but thought we would check it out as it sounded a little different. Items were taken on consignment so there was a lot of variety and at one point four auction rings were active ---- farm equipment (machinery, horse accessories, etc) and tools, furniture (new and used) including household items), quilts (more than 100) and horses (more than 100). The quilt and horse auctions even had printed programs briefly describing the item and who the seller was. 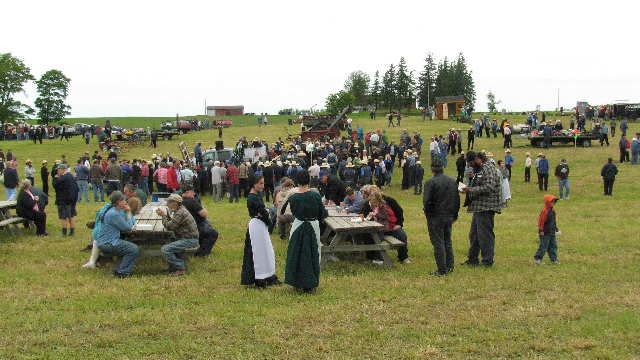 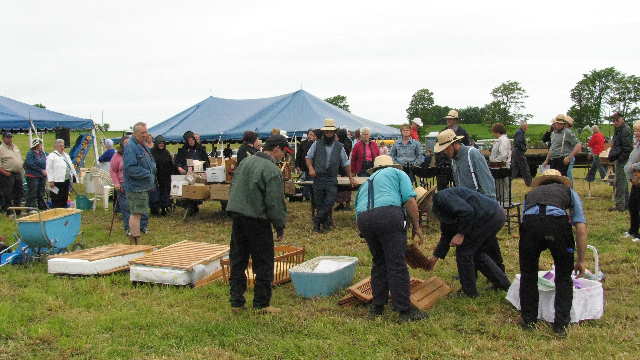 The furniture auction --- there were lots of Muskoka chairs and a couple of amazing Oak tables. I find it really interesting to see which items sell well, the amount things sell for and who buys them ---- I'm always trying to pick out the antique dealers. 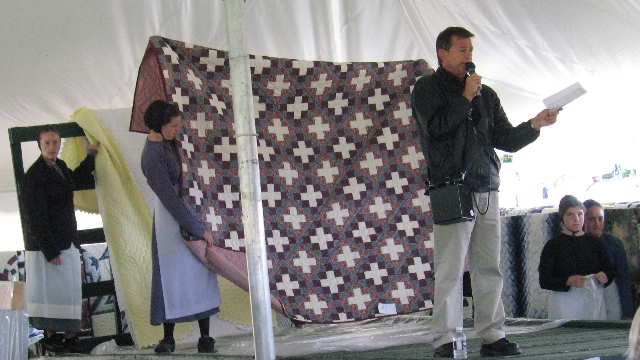 The quilt auction attracted a lot of attention. The auction was in a tent complete with benches. Anne and I watched about 15 quilts being sold and in that time a woman sitting behind us bought at least 4 of them ---- I'm thinking dealer. The larger quilts were selling for $300 to $500 (pieced or printed seemed to make a big difference in the selling price). 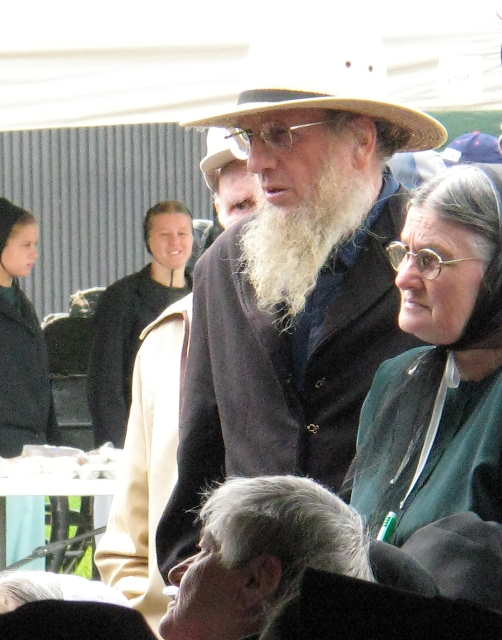 There were lots of interesting faces in the crowd ... people watching at these events is also a lot of fun. 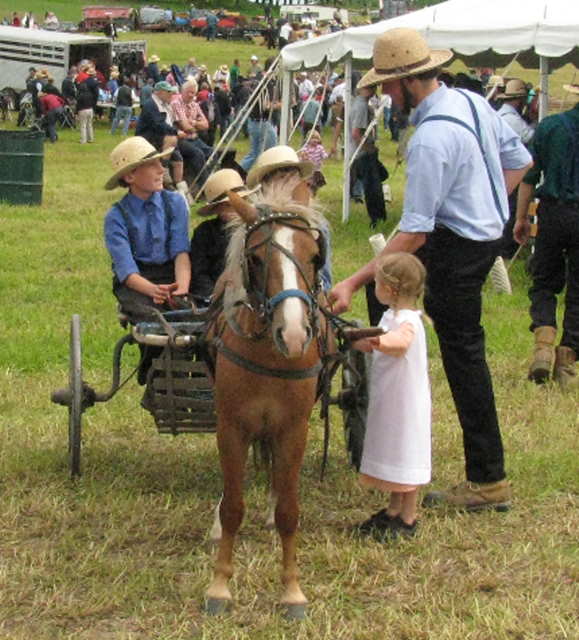 Many of the horses and ponies that were for sale were being road, driven or lead around the farm to garner interest ---- I think some of them were also "test driven". 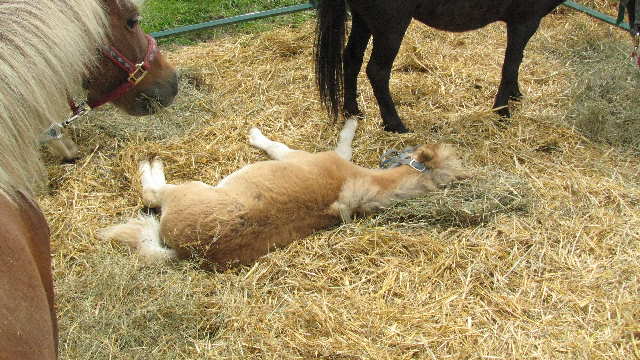 Even with all the excitement this little guy took a much needed nap. 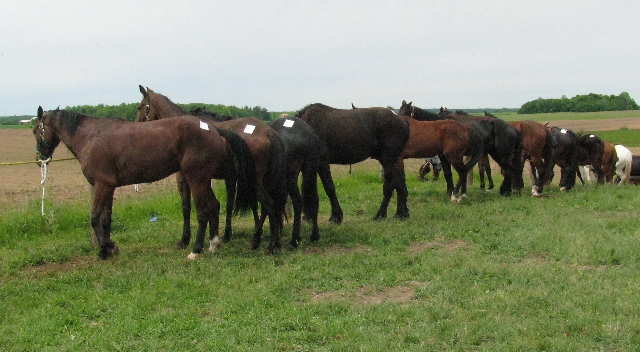 Ready for the sale. 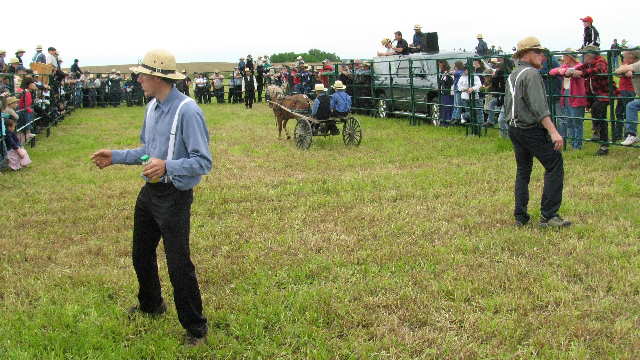 The horse auction took place in a ring that of course was also for sale. There were four very animated men in the ring who solicited bids from the crowd and each had their own style of letting the auctioneer know when they had a bid --- it took me a minute to figure out what the fancy moves were for.


Tonight was the commencement (???) for the air cadets and one of the fellows in charge of the air cadets arranged for a B25 bomber to fly up from the Heritage Museum at the Hamilton Airport. The bomber was scheduled to arrive at 6:00pm but when we arrived at the local airport at 5:30 there were already a lot of people there ..... we were happy that we knew Anne and Victor and could park at their hanger. The little add in the paper didn't say anything about a charity barbecue but I guess word had gotten around but missed getting to me. 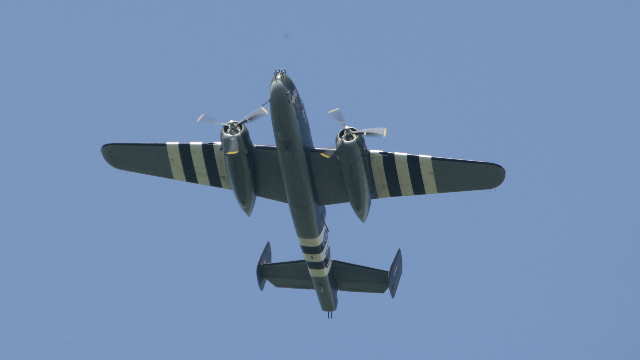 The plane arrived early so they flew over Walkerton and Hanover before landing. 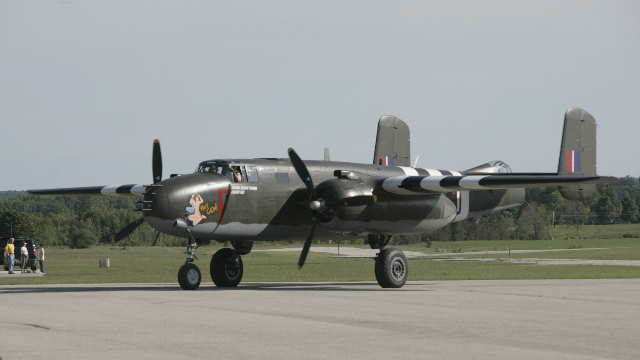 Still working on the gardens but the light at the end of the tunnel is getting larger .... maybe the train is just getting closer. I'm very happy with my Lupins this year. This one plant is gorgeous and I have a second one getting ready to bloom and it won't be long before I'm eating lettuce and spinach out of my vegetable garden. 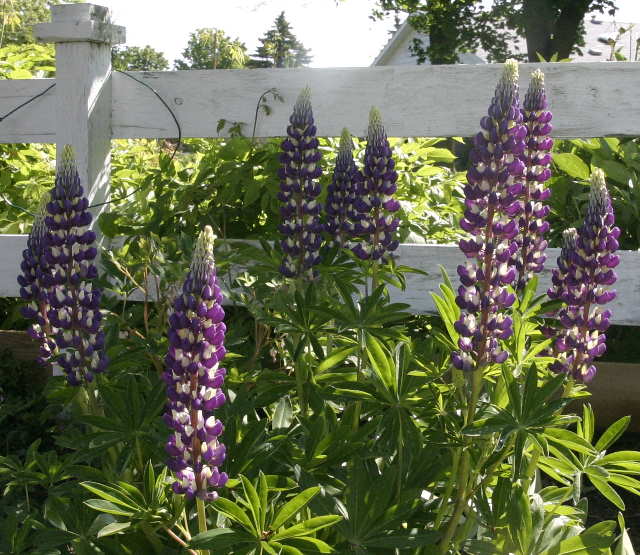 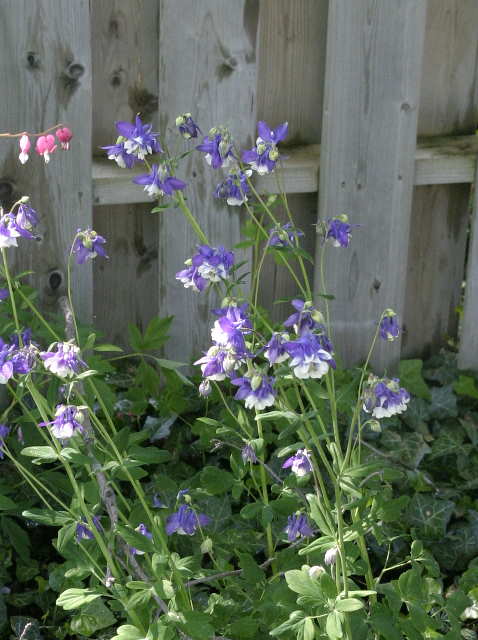 This Columbine not bad either.

At one point I was beginning to feel like a commuter once again. My mom had three eye appointments in one week and as drops were being given each time she needed a driver --- guess who was elected. I can't complain though as my brother gets to do all of the chauffeuring when I'm down south in the winter.

It hasn't been all work and driving though. Two Sunday's ago my mom, brother and friends Les and Louise drove up for a visit. We lost Les at one point and found him sitting in the backyard enjoying the peace and quiet --- yeah that's one of the selling pointing of Walkerton (peace and quiet).

On Saturday I attended my first farm auction and managed to leave without spending any money. Victor was the only one of our group that managed to win a bid --- he got a old trumpet that needs to be put back together, I'll guess item 5427 on his "to do" list. Ed bid on an old radio but as he only had $20 in his pocket it didn't take long for him to drop out of the bidding. Ed recently fixed a 1920's radio that we've been carting around for 30 years so I guess he's into fixing up old radio's at the moment.

Today we met Ed's sister at the McMicheal Canadian Art Collection in Kleinburg where there is a wonderful Karsh exhibit. Now everyone is saying "who is Karsh?", well, he's a famous Canadian portrait photographer who has photographed some of the greatest world figures. One of his most famous photographs is of an indigant Winston Churchill. In 1941 Churchill was speaking to the Canadian parliment and during a break he was ushered into a room where Karsh had his equipment set up. With an appology, Karsh plucked the ever present cigar out of Churchills mouth and took the photo. We also enjoyed some wonderful paintings by the Group of Seven, part of the permanent collection at the gallery.