Ed and I have been working hard around the house ........ don't think we've gotten a hang of being retired yet but I think we've gotten really good at being re-tired. At least I have. The vegetable garden has been dug out and planted .... tomato plants went in yesterday so I'm crossing my fingers that we don't get any more frost. The flower beds are slowly taking shape. Two beds are disappearing from the front yard and I'm moving the edging stones to the back yard and using them to edge the back garden. One bed is gone and in another week or so the second one should be gone which will mean all but one bed in the backyard will be organized. Ed has been spending a lot of his time encouraging the grass to grow ---- he's still trying to get the grass to grow after we devastated parts of the lawn with the construction last year.

Last Thursday we took a day off and drove to Sauble Beach (an hour north of Walkerton) to visit our neighbours (Ron and Ellen) at their cottage (they were on a weeks holiday). Being a Thursday early in the season the beach was quiet so Zaph was able really enjoy himself. 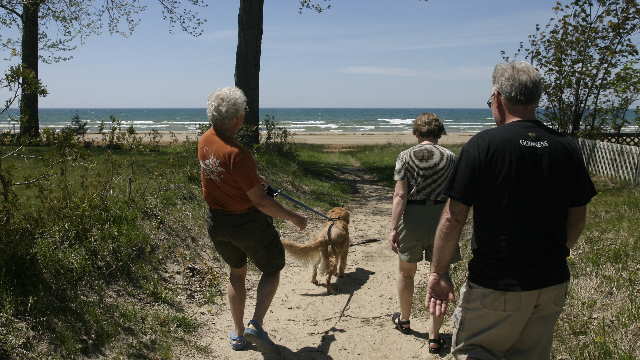 Oops we forgot to bring Zaph's good leash and chocker collar so he was able to drag Ed to the beach. We think that the beach exerts a magnetic force that pulls Zaph towards it with exteme force. 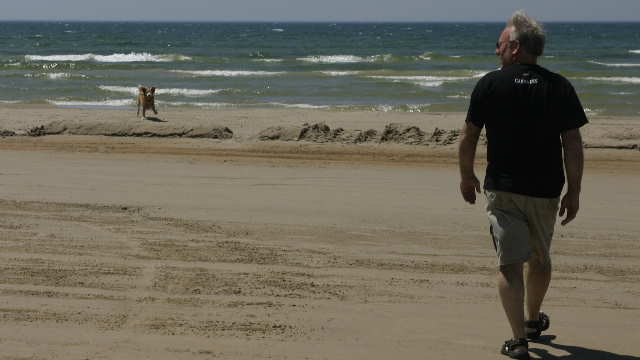 Zaph encouraging Rob to hurry up and get to the water. 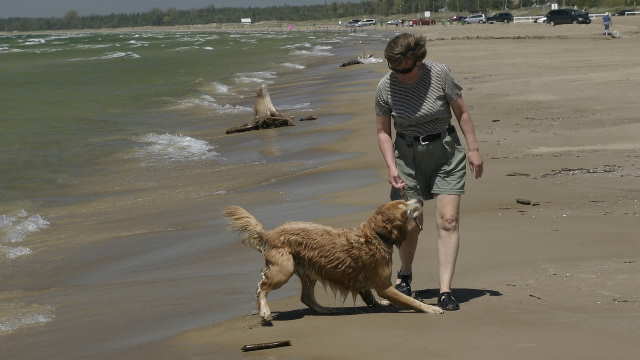 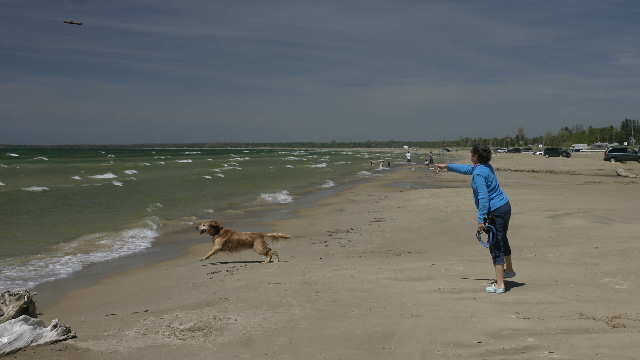 Pretty good throw for a girl .... see the stick in the upper left corner of the picture. 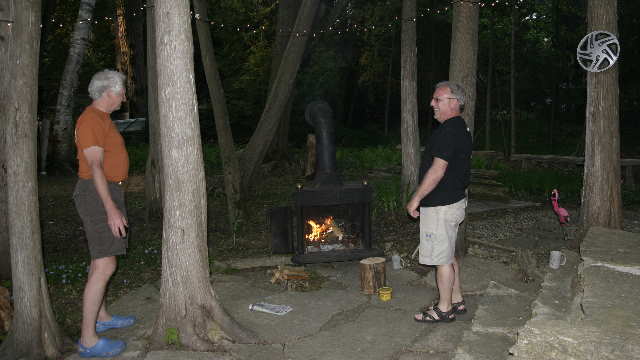 An old Franklin wood stove was in the basement when we moved into our house. The house inspector informed us that the Franklin stoves were not considered safe for use in a house so this summer we moved it out of the basement. When Rob saw it he asked if he could have it to use at his cottage. Currently he has it sitting on a rock outside the bunky and it works great.


The sprinklers have been running most evenings as Ed encourages the grass to grow. One evening I found a "thing" with a very wet head standing by the door ---- someone must have been surprised by the sprinkler. I tossed a towel on him so Ed could dry him off, but instead Zaph followed me around the house towel and all. 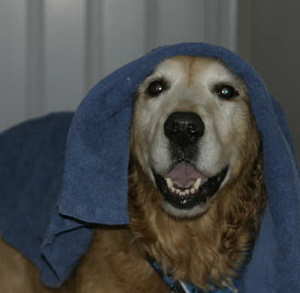 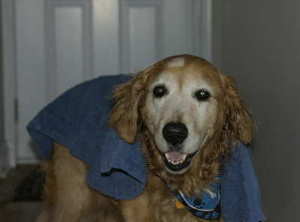 Shortly after we arrived home to Walkerton in April, Sonya called and asked if we would go into Toronto to visit her on her birthday, May 9. As May 10 was Mother's Day and a doctor's appointment was made for me on the 8th (just one of those routine tests) we decided to go for the weekend leaving Thursday afternoon. As we were in Burlington we met our friends Chris, Tina and son Dave for dinner (we were happy to hear that 15 year old Dave wanted to come and see us --- read that as talk to Ed about computers). 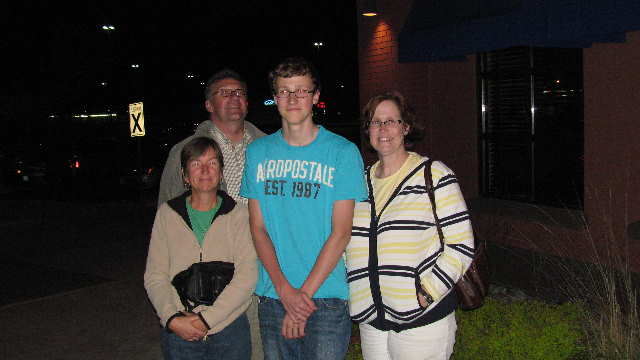 I can remember when I was at least that much taller than Dave ..... Ok it was a long, long time ago. At 6 foot 4 and 1/2 inches Dave is taller that his mom and dad and a foot taller than me.

Toronto was it's normal large city self, lots of traffic, a Tamil protest (we were in the area but only saw the police presence), and the usual number of interesting characters including a 6 foot 200 lb (guessing) fellow dressed for a Saturday night on the town --- hat, bright red lip stick and a red party dress with enough of a crinoline that the skirt stuck out at a 45 degree angle. Ed, Sonya and I enjoyed some gourmet pizza for lunch (yummmm), a trip to the Art Gallery of Ontario and dinner at one of our favourite restaurants --- Little Tibet, which was wonderful as always. 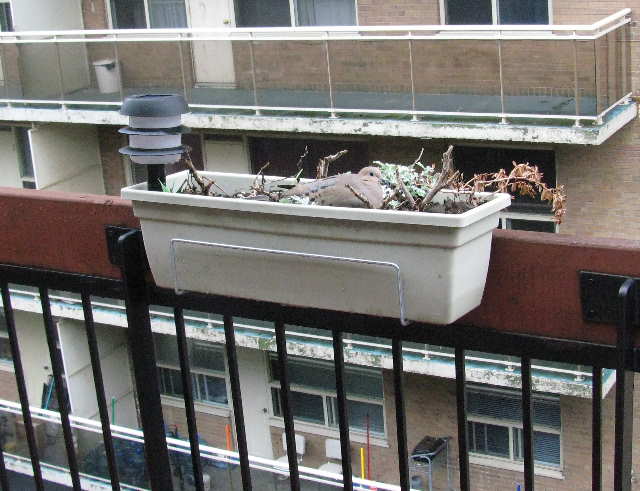 A couple of days prior to our visit Sonya was surprised to see that she had a new balcony mate. A Morning Dove had decided to nest in one of her flower boxes. According to information on the Internet this is normal behaviour. 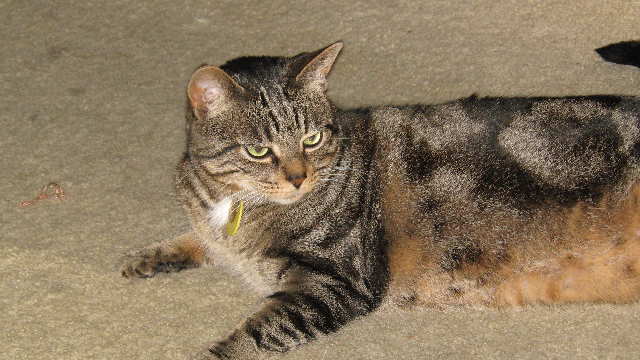 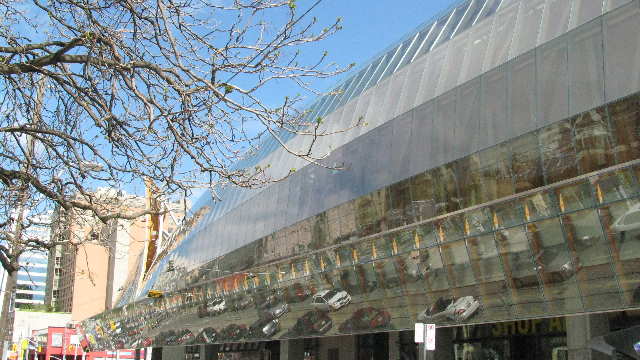 The Art Gallery of Ontario has had some major renovations with one of them being a facade added to the front of the building. We like this change a lot better than the one they did the Royal Ontario Museum. 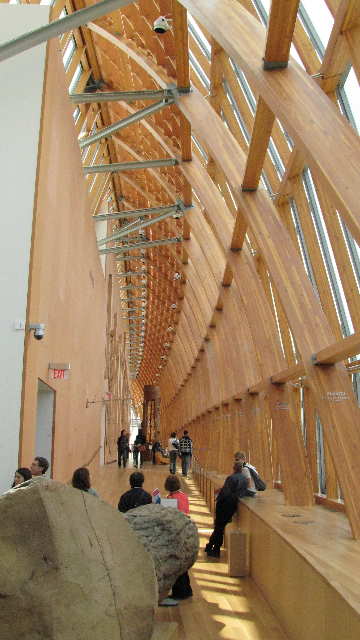 The inside of the new facade is a beautiful, warm, sunny spot. During our visit to the art gallery we saw some interesting pieces. One painting by Salvador Dali was either a fruit bowl with a face on a sandy beach or a dog on a beach ---the piece kept you looking to see what else you could see. Our eyes were feeling happy when we left as we had spent some time viewing our favourite artists include the Group of Seven and Monet. 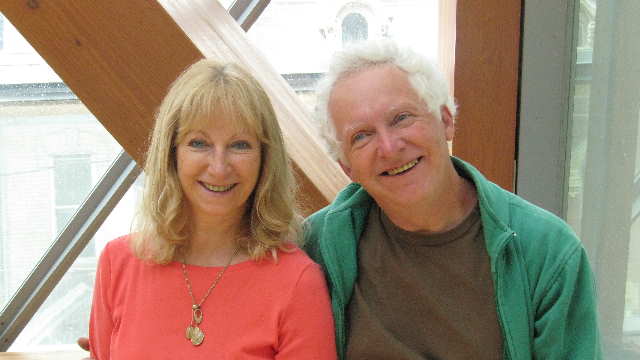 Today it was back to reality ---- I'm trying to whip my vegetable garden into shape so I can get it planted. As we've had frost the past two nights it's still to early for plants but I could get some of the seeds planted.

Don't Fence Me In

Sorry Zaph the deed is done but in the end you'll be happy about it. Two sides of our backyard were already fenced so we decided to finish the job this year. Zaph is pretty good when he's off his leash but he is very social and loves to visit his friends. So if he hears Bill at the corner or Curtis (especially when he's playing street hockey or basketball) across the road at the corner, or Rob or Ellen across the road he's off to visit. Luckily the street doesn't have a lot of traffic and the locals watch for dogs and kids. With the backyard fenced I'll be able to garden and have Zaph loose to help me ..... maybe that's not the best idea as he likes to roll on the Periwinkle and dig to China in the vegetable garden.

Have you ever used a post hole digger? If you haven't you should as it's an experience you shouldn't miss out on, but make sure you pick ground with a fair number of rocks in it. We rented a "one man" post hole digger ---- I guess one guy could manage it but it's easier with two people. 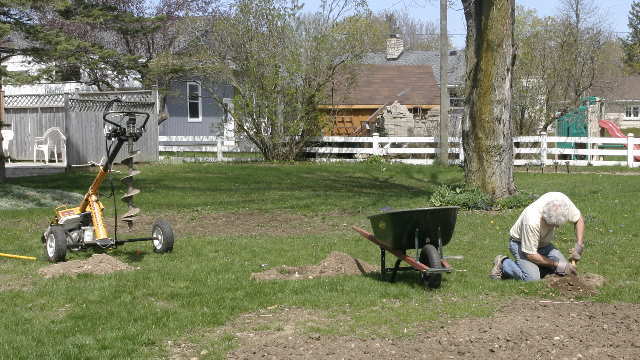 Ed finishing up a hole by hand.

The post hole digger works wonderfully if the soil is sandy .... we had one spot that matched that description. Unfortunately, the remaining nine did not. The post hole digger does not dig through large maple tree roots or large stones. Too many potato size stones can cause the digger to jam and get stuck ..... took us about 15 minutes to get the digger out of the hole .... Ed talked to Terry at the local building supply company and Terry got the same digger stuck sufficiently that he spent two hours digging it out. It was hard work digging the holes with the "digger" but it would have been harder if we had to dig the holes by hand. 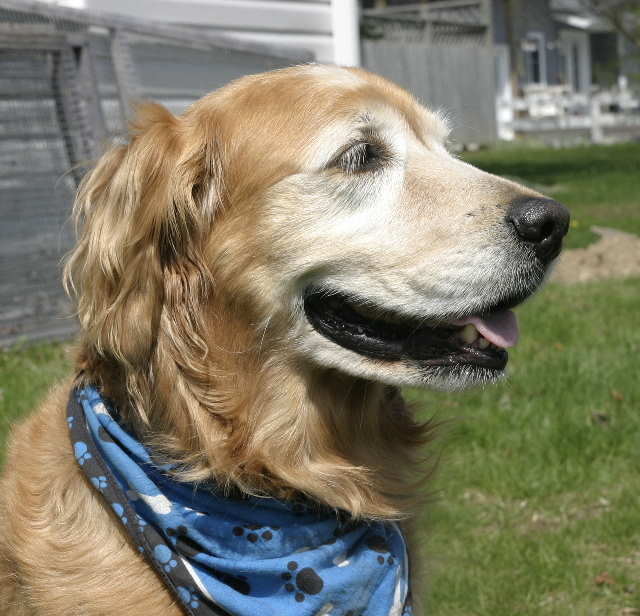 Can't resist taking pictures of my handsome boy .... he's a real ham and usually poses whenever he sees the camera. 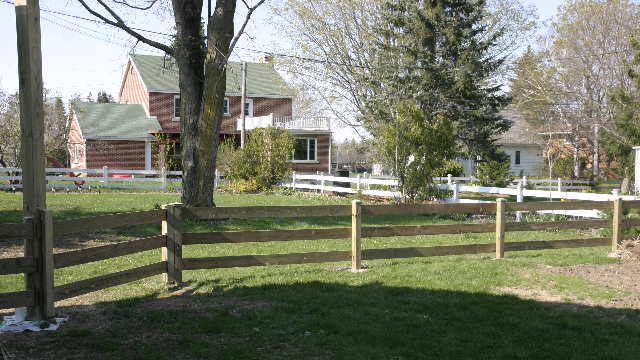 One section of the new fence. The post on the left is tall as it's also going to be used as one end of the clothes line. 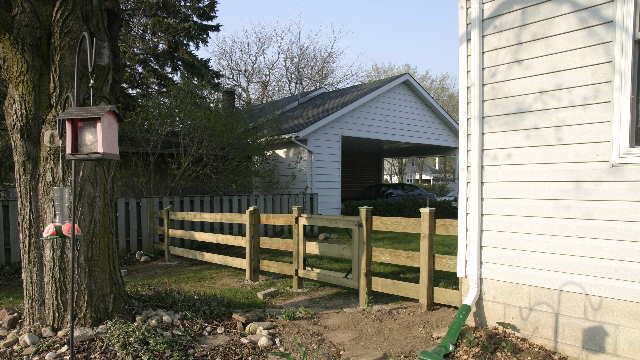 The other section of fence. Ed designed it so that the boards in the longer span on the left can be lifted out allowing riding mowers and other vehicles access to the back and front yards. There's also a gate so people can easily access the yard. 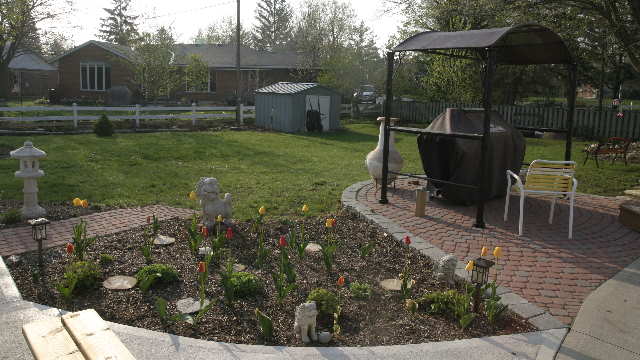 I took a break yesterday and had a cold drink while sitting in the courtyard. I'm really happy with this part of our back yard.

It's hard to believe that we've been home for a month and in seven more months we'll be heading south again. The time is just flying by. Ed's been busy getting the "theatre" room in shape and has the front section done --- the back half is a work in progress and has been slowed down as we're still deciding what we want to do. We've watched a couple of movies and though it is missing the ambiance of sitting outside with friends watching the movie projected onto a trailer it was very nice. Ed's still itching to turn the volume up but so far I've managed to control his urge .... one of these days when I'm not home I'm sure the house will be shaking.

The garden is a work in progress ..... I'm hoping that by the end of this summer will have all of beds organized as we've finally decided what we want to do. Think I'll be busy this summer. 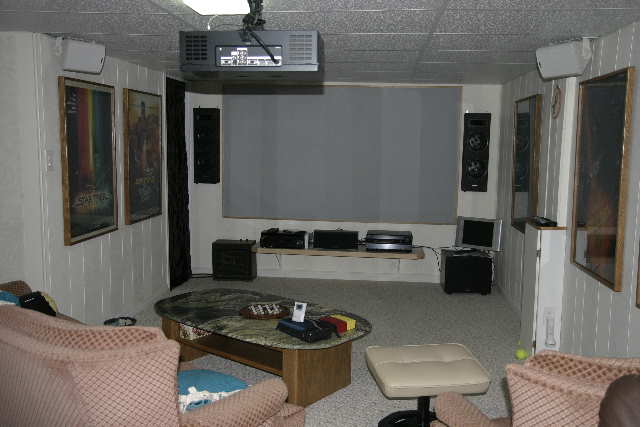 The "theatre". The screen is a flat grey .... don't know why the photo shows stripes. 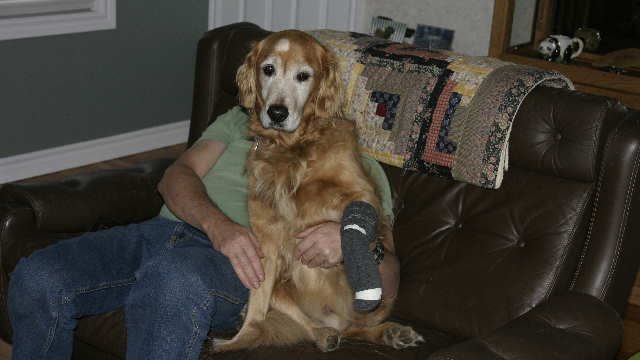 Someone was feeling very sorry for himself so he was snuggling with daddy. Zaph's nails were trimmed earlier in the day and tonight he put too much pressure on one of them and it started bleeding so we bandaged it up protecting it with one of my socks. Managed to keep it on him till the bleeding stopped.