Isn't it amazing how time flies. One day it's early September and we're enjoying the last of the summer weather then it's almost the end of October and there's frost and snow flurries ..... brrrrrr...... Winter is definitely on the way. Ed and I have 36 more days of this weather to "enjoy". Hmm.... now I'm wondering why we decided to delay our departure by a month. Must have decided on one of the warm days and convinced ourselves that winter would be late this year and the pros of staying exceeded the cons.

The excitement last weekend was learning how to make sausages. The woman who runs the restaurant at the local airport has sausage making equipment and offered to teach Anne, Victor, Ed and myself how to make sausages. Now, I'm sure you are asking yourself why and I answer why not. Ed and I were a little late but jumped right in when we got there. I started trimming the fat and grizzle from the meat and Ed helped with the grinding --- it was the manual kind where you had to turn the crank --- yes they discussed how to put a motor on it. At one point there were four people watching me trim meat .... felt like I was working on a construction site --- you know one worker and four supervisors. Once all the meat was trimmed and ground the spices were added and the meat mixed --- lucky Ed got to do that part. The meat was a ground a second time and pushed into the casings. The guys took turns grinding as it was hard work ---- yup lots more discussion on motorizing the processing. After the sausages were all made and he kitchen cleaned we headed to Walkerton to barbecue some of the sausages for dinner. The sausages were very lean, in fact a little dry though very tasty. Guess I was a little too enthusiastic in trimming the meat. A couple of days ago I used some of the sausages in Chili and I didn't miss the fat.

Thursday was my brother's 60th birthday (he's getting old but I'm not!!!) and my mom had an appointment with the eye specialist so Zaph and I drove down to Burlington for the day (Ed went to help Anne and Victor hook up their generator). Yeah!!!! good news, my mom's eyes haven't changed in the past year. My brother had the week off as vacation so were able to have a visit during the afternoon.

Today is Thanksgiving day for us Canadians and the last long weekend before Christmas. Mother Nature decided to treat us well and gave us a spectacular weekend ..... sunny everyday with highs in the low 20s C. On top of that I think the fall colours were at their prime. A month or so ago I decided that there were a number of people we needed to see before we head south for the winter so I started trying to arrange visits. It turned out that the Thanksgiving weekend worked for three of them so I decided and somehow got Ed to agree that we'd fit them all in as well as a visit to my moms.

We left just after lunch on Saturday and drove to Brampton to drop off a repaired toy box and have turkey dinner with our friends Bob and Gwen, their kids John and Sue and Gwen's mom. (Ed made the toy box about 18 years ago after Sue was born and this summer it was returned to us so Ed could remove "Sue's toy box" from the front and fix the top that was broken when someone stood on it). Dinner was yummy and Zaph was spoiled once again as Gwen's mom brought him a rawhide shoe as a treat. After dinner we drove into Toronto to Ed's sister's (Sonya) condo. We had expected our sleeping accommodations to be an air mattress on floor but were pleasantly surprised to learn that we were staying in a neighbours condo. The couple were going to be away for the weekend and offered their bed to us --- very nice.

Sunday morning we drove out to "the beaches", an area in Toronto that is on the lake and has nice beaches, where we ate a delicious brunch which was then followed by a walk on the board walk. It would have been nice to spend the rest of the day at the beach with Sonya but we had to say good-bye and drive east to "the farm" to visit with my uncle Len and my cousin Bob and his family. "The farm" is just outside the village of Kendall. As we hadn't seen any of them for about 14 months we had lots to catch up on. After a nice visit we climbed back into the car and drove west to Burlington and my mom's house where we stayed for the night.

Monday morning we woke up to the sounds of my mom in the kitchen as she prepared Thanksgiving dinner --- ham and scalloped potatoes, yum. We certainly managed to get enough to eat this weekend. 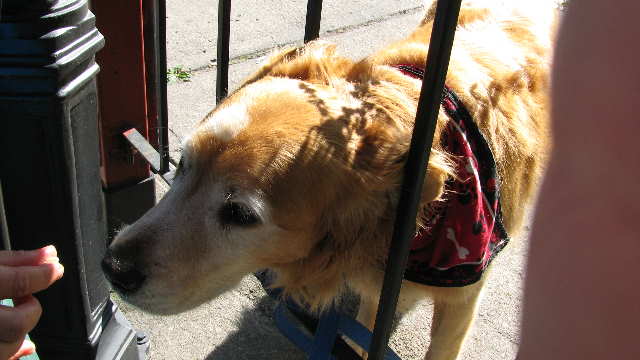 It's Okay for mom and dad to be in jail as long as they still feed you. A Toronto by-law prevents pets of joining you on the patio but nothing can stop them from putting their head through the fence. This was a pet friendly restaurant --- water bowls were provided and one of the waiters went out and gave Zaph big pets a couple of time. 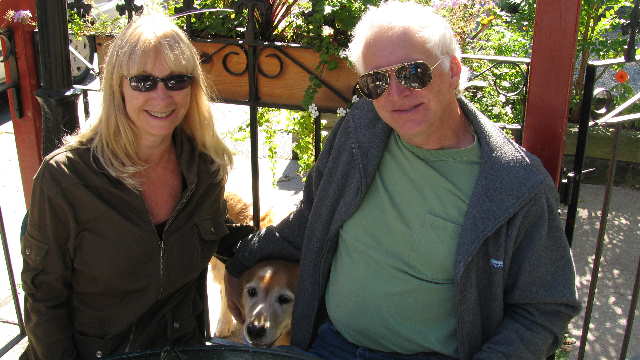 Sonya, Zaph and Ed .... who says a fence will keep you out of the festivities. 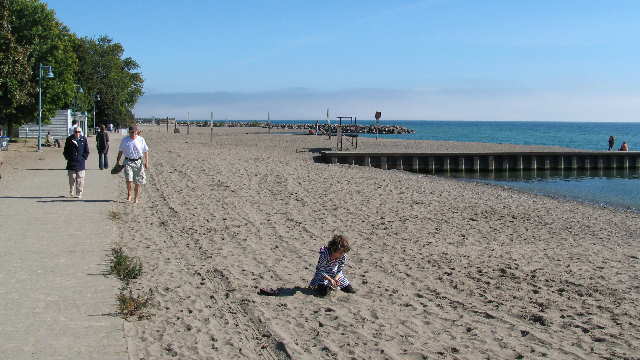 It's hard to believe that this beach is in the city. The lake was too cold for swimming but lots of people and dogs were enjoying walking on the board walk. A paved path was available for the bike riders and rollerbladers. 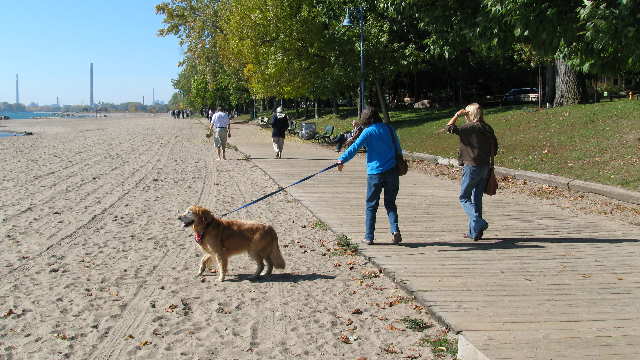 Some dog's have a one track mind .... Zaph was sad that we didn't get to spend more time at the leash free beach .... maybe next time 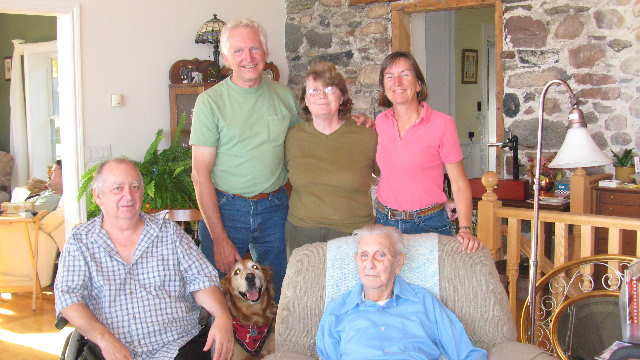 My friend Lori is having her birthday today ---- she's calling it the card playing birthday. I spoke with her husband a week ago and volunteered to show up at their house and cook Lori's birthday dinner but plans changed when he called and told me how busy he was and ten people would be at dinner. Now it made sense to dinner in my kitchen and take it with me so this afternoon Ed and I loaded the car with 3 lasagnas, some extra meat sauce, bread dip (minus the bread), raspberry pie and carrot cake. Jack was picking up the bread and vegies for the dip, Caesar salad fixings and garlic bread so when I arrived at his place all we had to do was make Caesar salad and clean vegies. By five o'clock everything was done, the lasagnas were in the oven and the kitchen was clean and tidy. I think Lori had a good time and both her and Jack were able to relax and enjoy the birthday celebration. 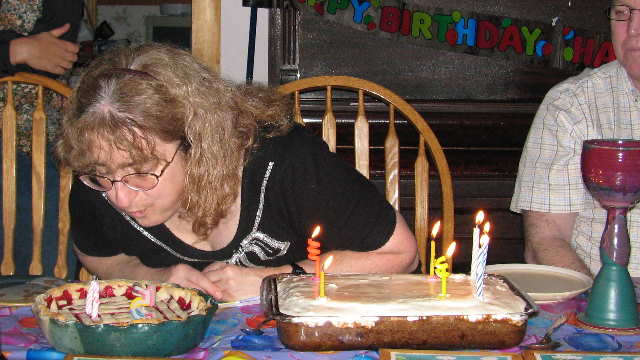 2 chances for wishes .... Lori blowing out her candles

Part of the reason for Colin and Margaret's visit was for Margaret to finish sewing the curtains for the basement. It went pretty fast this time around (she had that stretchy slippery material figured out) and she was done by lunch time. After lunch the boys drove to Hanover to do a couple of errands while Margaret and I took the dogs for a walk in the rain ---- the three of them didn't mind though Margaret and I would have preferred drier weather. Later in the afternoon the Werners drove to their campsite at the conservation area in Elora. 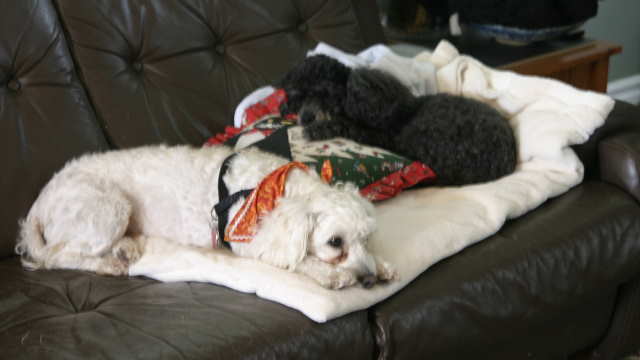 The princesses doing what princesses do best. Splash (black dog) and Mexi (white dog) in repose while Margaret was sewing.