My sister and brother-in-law who live in Texas decided to take a week and a bit holiday and drive up for American Thanksgiving so they could visit their mom's (Darryl's mom is 91 and my mom is 85). As we are in a weird perverted sense on the way they decided to stop and stay for Sunday night. It was nice that they made time for a visit and to see our house. As we live far apart it'll be strange to see them again in less than two weeks as we'll stop to visit them on our way to Mission. I think the most exciting part of the drive for them was shortly after they crossed the border at Sarnia. There had been a dusting of snow in Michigan but nothing like the 2 to 2 1/2 feet that fell in the Sarnia area last week. They even got to drive on a snow covered road for over 25 kilometres.

With less than a week to our departure date Ed and I have started getting organized to leave. The hot tub has been winterized and piles of stuff are forming as we begin pulling out the items that need to go to the trailer. It's been hard work but we've just about eaten everything that was in the freezer and the fridge is looking pretty bare --- it would be a lot easier if we could take more food stuffs across the border. After a lot of debate Zaph has chosen the toys that will travel south so other than loading his food he's ready to go .... he wanted to take them all of course. Six sleeps to go or maybe five or maybe seven. 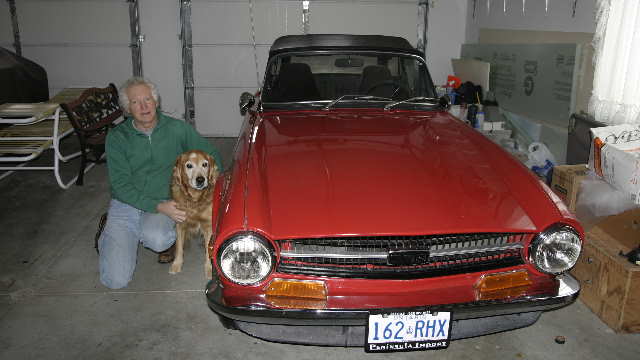 Our friends Deb and Luc along with their dog Hairy Pawter arrived around lunch time for a long overdue visit. Luc was one of the lucky people who helped us move last year. An advertisement for the Thousands of Nativity Scenes had been delivered to our door earlier in the week so Deb and I decided to go and have a look. Last year when Ed and I had gone it was very busy so I was happy to see an almost empty parking lot this year. The display was as amazing. One of the local churches borrows nativity scenes from people in the area then sets up the display. We were told that it takes 2 weeks to set it up. A girl who I would guess was around 10 years old, pointed out several things to us .... one was a nativity scene in half a walnut shell and nativity scenes on the cloths that other scenes were displayed on. 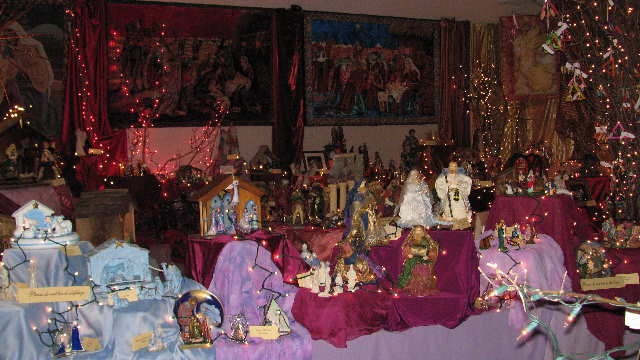 The nativity scenes themselves were beautiful and so were the rooms they were displayed in. 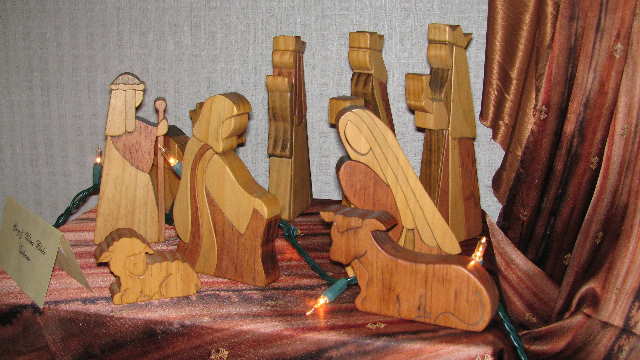 This one was made using different types of wood. 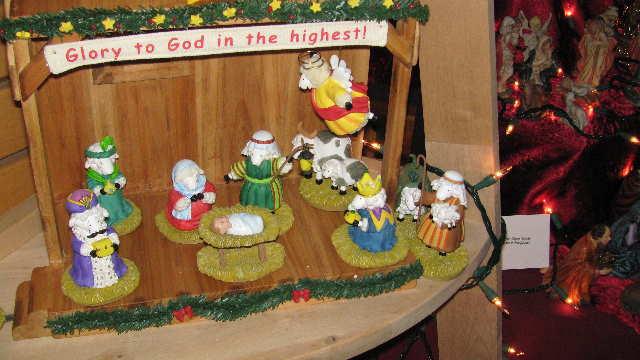 There were several scenes where the characters were animals ... in this case sheep but also bears, dogs, and cats. 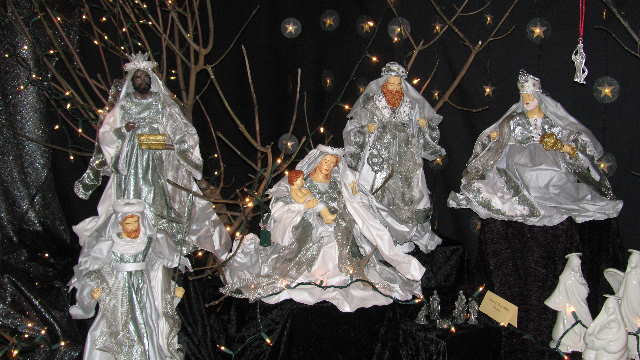 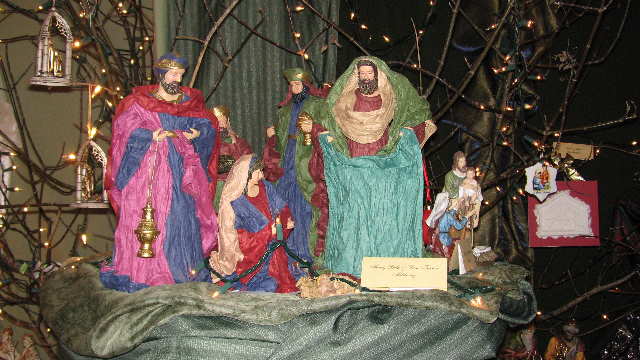 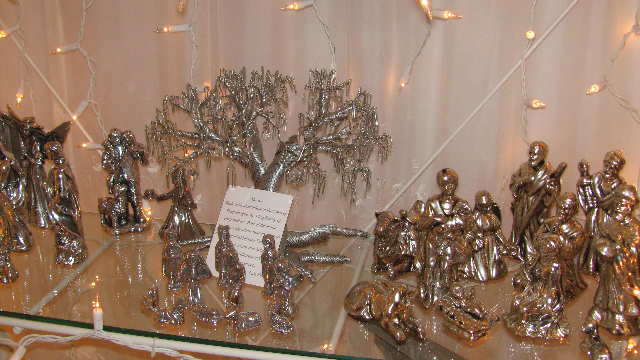 The silver set in the middle was made in Mexico. 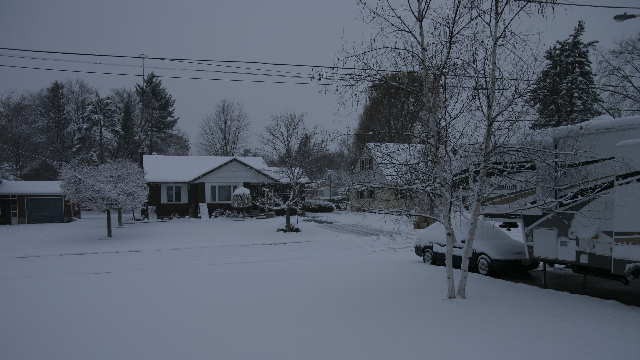 pretty scary stuff. It looks like winter has arrived in Walkerton. The good news is the snow will melt over the next couple of days but the bad news is we'll probably get more next week that will hang around a lot longer. Only three more weeks......... 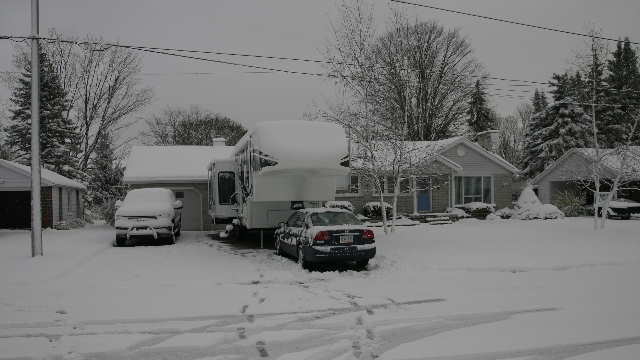 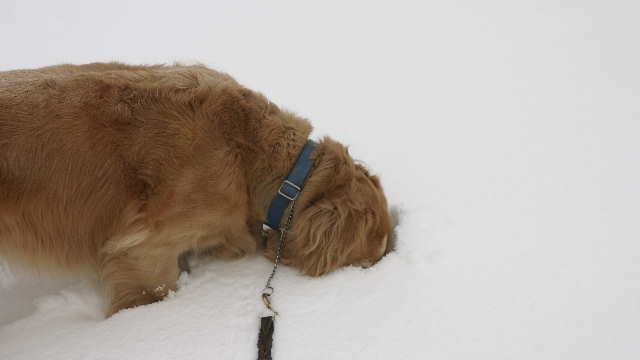 I wonder what's under this white stuff

Saturday is Lori's annual pottery show and as in past years I helped set up. This year was a lot more relaxed as setup occurred on Thursday not Friday .... I wonder which helper suggested that last year? I showed a lot of restraint and only left with 2 pots which probably has more to do with my cupboards already being full of Lori pots and not will power. 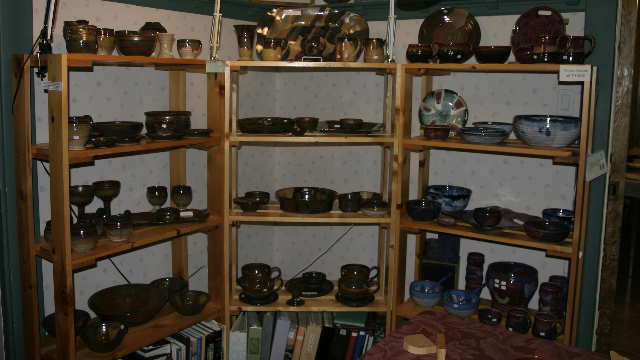 Some of the pots 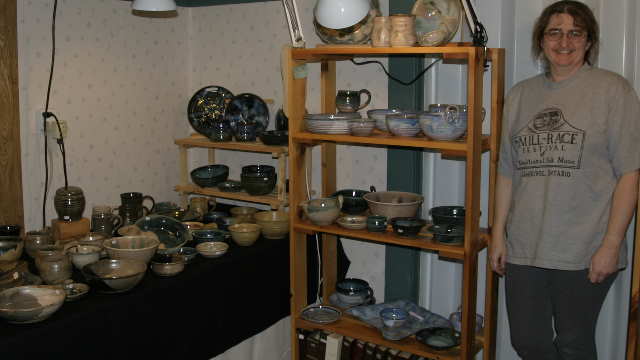 more pots and the potter

Start the Count Down

It's funny how you can live with something for a year and then all of a sudden you can't stand it any longer. Well that was the case with the wall colour in the bathroom and the guest room. The past week was spent remedying that situation. Now I have a "November Rain" bathroom (sounds really gloomy but it's not .... it's a very pale grayish green) and a "White Down" guest room (builder's beige ... but it matches the light colour in bed spread so it works well). I guess all that really matters is that Ed and I are happier with the rooms. Ed is still working on building the bookcase in the basement but progress was halted the other day when a belt on the planer broke. Today he tracked down a new belt and it should arrive by Wednesday next week.

As my jobs are done and the Indian summer weather appears to be over I'm ready to head south --- only 26 days to go. (The extended health insurance we purchased starts December 1 so I guess we should wait to leave till it kicks in).