Visit with the Dentons

The past couple of years we've stopped at my sisters in Tyler, Texas on the way down and then they come to visit us at a state park on our way home. This year was no different, though they drove the van instead of the motorbike --- too many thunderstorms in the forecast. Andy was happy about that as it meant that he got to visit as well. Darryl and Carol were impressed with the new trailer as there was still room to move around after the couch was opened into a bed. It was good to see them again .... or should I say what's left of them. Both Carol and Darryl have lost weight and look great.

As Carol and Darryl had a five hour drive home they left after lunch on Sunday and we left shortly after them. Tonight we stayed in a Staples parking lot with another trailer as we were told that the manager of the Wal-mart didn't particularly like RV's. 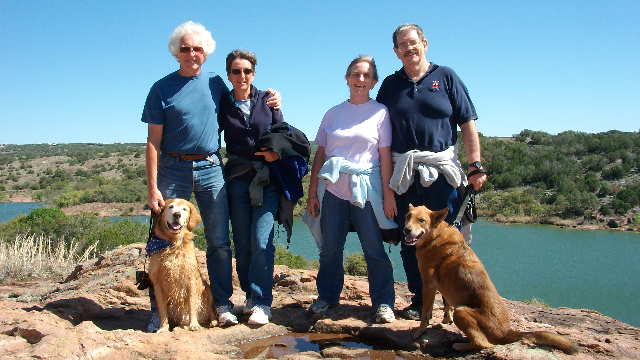 On one of our hikes a women saw Darryl taking some photos and asked if we wanted one of all of us. Zaph, Ed, me, Carol, Darryl and Andy