Two of our neighbours arrived on New Years Eve day. The snow in Illinois delayed them by a day --- the mid west is really having a tough winter so far this year. As is the tradition when there are new arrivals we went out for dinner. Being New Years Eve we decided to head out early and arrived at our first choice in restaurants at 5 pm --- it was going to be an hour wait so we headed to our 2nd choice. Not as popular a restaurant as we were seated right away. It was a little more expensive but the food was good and the company great. Ed and I opted for a quiet evening (they were having games and finger food at the rec hall) --- watched some TV and cracked a bottle of sparkling wine at midnight. It sounded a bit like a war zone as the Mexicans are very fond of fireworks and shot them off for at least an hour before midnight and half and hour after. 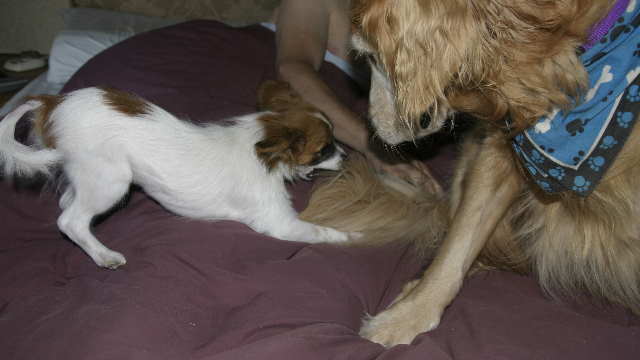 Zaph's new friend Gypsy came over to help wake Ed up --- she did a really good job. I had let Ed sleep in and skip Saturday coffee as he's fighting a cold. Gypsy is my neighbour's 5 month old Papillon and she seems to really like Zaph.

Working on Zaph's rawhide chews --- she still has the razor sharp baby teeth.

Have you seen Avatar 3D yet? I didn't know much about it except for the few clips I'd seen and that it had been in the works for 15 years. Ed really wanted to go so I thought I might as well go too and I'm really glad I did. It was an amazing movie .... great special effects but also a story and of course good won over evil. It's been a good day --- bridge with decent hands, the movie and a visit to the DQ. Life is pretty good.